UNLV had their spring game from 12:00 to 1:30 on Saturday and really showed a lot of improvement from the previous year. The Rebels new offense is mainly run out of the shotgun with a couple of plays under center. UNLV's passing game seems to be inconsistent but when the quarterback has time to throw, good things happen. As for their running game, they are consistent but don't gain huge chunks of yards. They approximately gain 3.5 yards per carry.

Coach Hauck's new defense is a 4-3 and it seems to work pretty well for stopping the pass. As for the run, they don't give up big gains because of how well they contain the outside run, on average the offense had 1 yard per carry when running to the outside. But that means that the inside run is a little bit more vulnerable and normally allows teams to go for 3-4 yards per inside carry. The bad news on the day was that Senior Ramsey Feagai injured his right ankle during the trench fight drills. 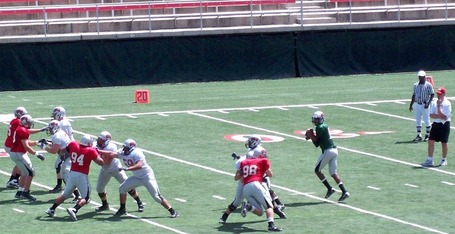 Most of the time Omar was on the field, he was hurried, so for most of this I wouldn't put much stock in to how he actually is going to play during the season. Omar did a horrible job of passing, going just 2 for 10 on the day, the 2 times he completed a pass he had time to. He didn't run the option very well although on QB draws he did great in which he gained approximately 8 yards per carry. Overall Clayton looked like his decision making was rusty under pressure but other than that his athleticism looked very good.

Did not play due to injury 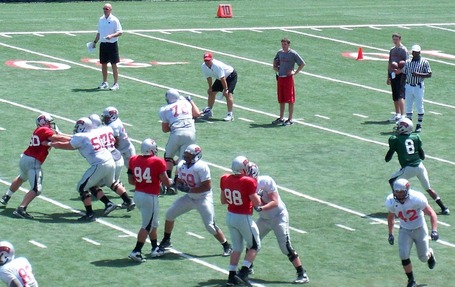 Caleb Herring has blossomed in Coach Hauck's offense, he looked great throwing the football and running the option. He threw 4 seperate times for more than 20 yards and ran an option play for 30 yards. I really do think he can become a prominent starter 2 years from now when Clayton and Clausen have graduated. He shows that he understands the offense and has the playmaking ability to execute the plays. If he can improve in reading defenses over the next 2 years, he could be a real force for this UNLV team. 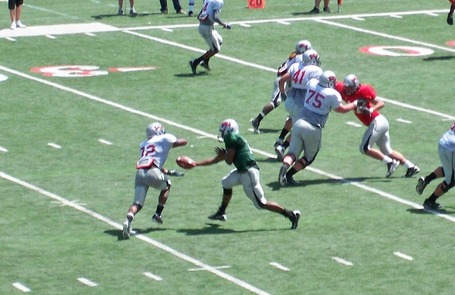 Trotter looked pretty good today, although he didn't have much space to run most of the time. He ran well in traffic, averaging approximately 5 yards per carry. Trotter is the starting RB and could really force defenses to stack the box and open up the passing game. Channing also caught well out of the backfield with 2 catches for gains of 10 and 15 yards. When Trotter is in space he is very versatile and can make anyone miss, hopefully Trotter will make as big an impact as UNLV needs him to.

Downs showed amazing physicality in the Spring Game today that I have never seen before. He broke 3 or 4 tackles on one run of 20 yards. Downs will not be the one getting the carries this year but I can almost guarntee you next year he will get some reps behind C.J. Cox. The only issue with him is he can't run well in traffic. If Downs can improve his speed and agility, he may be able to challenge Cox for that starting spot next year.

Randle looked great on the field today, he showed agility, speed and hints of hard-nosed, between the tackles running. Out of all the RB's today, he was the most consistent in running over 5 yards. He also caught the football well out of the backfield with 3 receptions for 17 yards. Bradley is only a freshman so in the next couple of years he could step up and definitely help out the team.

I'm just going to group the wide receivers in to one group because not one had over 5 receptions at the game.

The Wide Receivers were very disappointing, having at least 10 dropped balls and many other wrong-run routes. As a whole, the group looked pretty pathetic with not just the fact that they dropped a lot of footballs, but they also seemed like they had no field awareness. They signaled for the ball when they were in double coverage and they didn't find the open areas on the field. This can all easily be improved on as they head towards their home opener against Wisconsin.

The offensive line has a lot of good individual blockers, the one thing I didn't see out of them today was them gelling as a team. Many times they didn't know who to guard and it really put a lot of pressure on the QB. They need to get team chemistry going before they are ready for a game. The good news is they have a lot of talent up front and can build on that.

Analyzing the Offense as a whole -

From what I saw today, it looks like everyone but the offensive line has the chemistry needed to be a good college football team. The Wide Receivers and QB definitely are on the same page and so are the Running Backs. If the Offensive Line can really gel, then the whole offense will.

Willie Tupou, who is a freshman out of Reno, has already started to command double teams and could really cause havoc in the backfield. Whether that be by drawing attention or sacking the QB.

As a whole, the defensive line looked great, they put a lot of pressure on the QB by causing confusion up front.

The secondary and linebackers were great in coverage except that they allowed receivers to get up the seams too easily sometimes. Their only issue was they were hesitant to run to the line during a run play.

Safetys seemed to have issues with covering the deep threat in cover 2.

Overall the defense looked pretty nice, except for a couple of mistakes in the secondary.

Ben Jaekele looks like the best field goal kicker UNLV has had in a long time, he made a 50 yard field goal at the game and got a touchback by the receiving team on the kickoff. Both Bradley Randle and Michael Johnson had long kick returns past the 40 and could be the kickoff returners.

Here is what Coach Hauck had to say about the team's progress:

"We're making headway," Coach Hauck said, "But we aren't exactly there as a team yet."