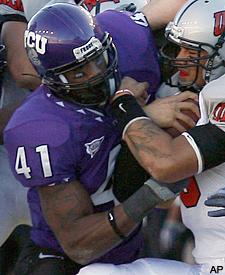 Strengths: Still has room to grow since he did not get significant time until his Senior year when he become a starter.  Very athletic and is good enough to keep in the game on rushing and passing situations, which makes him more valuable then a situational player.  Stock rose after a stellar practice week at the Senior Bowl.

Weaknesses: His size is more of a safety then a linebacker and will be playing the outside linebacker position.  That will prevent him from being an early second round pick. He only had one  year as a full time player at TCU where he started two games in 2008 before becoming a full time starter in 2009.

NFL Draft Talk: Became a starter last year and helped TCU repeat as the top-ranked defense and led the team with 109 tackles. Doesn't seem instinctive but manages to get in on his share of plays with sheer aggression and sideline-to-sideline speed. If his production catches up to his potential, he can be special. - Frank Cooney, USA TODAY/NFL Draft Scout

Projected Round Drafted: Mid second to early third round.