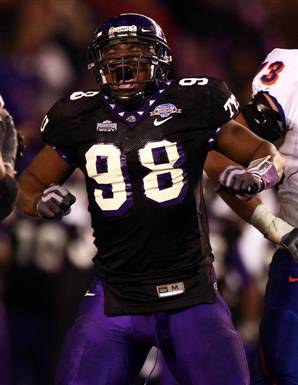 Strengths: Versatility, Hughes was a high school running back and was converted to defensive end.  He is able to play outside linebacker in a 3-4 or an end in a 4-3. Outside linebacker is probably where he will end up since he is on the smaller side to play defensive end.  Very good as a pass rusher as he had 28.5 sacks in his career, and lead the nation in 2008 with 15.  Stepped up with big games against top competition.

Weaknesses: Needs to learn more moves to become a better pass rusher at the NFL level.  He played against lesser competition while in the Mountain West.  Only played defense full time since arriving at TCU in 2005, he previously played running back in high school.

NFL Draft Talk: A defensive end at TCU, due to a lack of size he is expected to move to outside linebacker. The two-time consensus All-American will probably be used as a pass-rush specialist.  Must acquire a better repertoire of moves to be considered a constant pass-rush threat. - Frank Cooney, USA TODAY/NFL Draft Scout

Projected Round Drafted: Mid to late second round.