The Rose Bowl Has Spoken: Wisconsin Is Your 2011 Champion

Share All sharing options for: The Rose Bowl Has Spoken: Wisconsin Is Your 2011 Champion 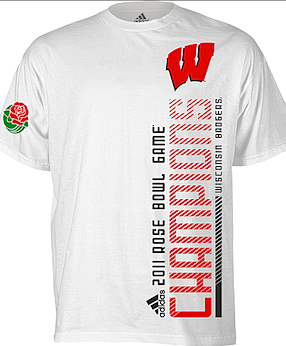 It looks like the Rose Bowl is making a bold move by offering up 2011 Wisconsin Rose Bowl Champion shirts. The shirt can be bought for $20, but of course there is no similar gear for TCU fans to pre-order. In fact, none of the other BCS bowl games have a t-shirt available for pre-order for their potential bowl game winner.

The closest thing is the state of Alabama stating that all Academy sporting good stores will reopen to sell Auburn title gear when they beat Oregon.

Honestly, I am not sure who is behind this, but why in the world would anyone want to piss off TCU and Gary Patterson. I guess TCU will be working hard to beat Wisconsin so they can send these shirts to a country that needs them, and they can bee seen along side Buffalo Bill Super Bowl champion t-shirts from the mid-90s.