Well this series has taken a back seat, but now its time to bring it back.

So the game may not have sold as many tickets as advertised, and for doing so the Deseret News took down a Jeff Call column that said only 10,000 tickets to the game. Thanks to cached pages, you can read the pulled article here.

Miner Rush presents their keys to success for both teams and here is a sample:

BYU: RUN THE BALL! The Miners have been very susceptible to the run this year, and have nothing to argue otherwise. Five opponents of the Miners have rushed for over 200 yards, make it six and you have a good shot at winning the game. All five opponents who did it so far, won.

UTEP: THROW THE BALL TO KRIS ADAMS! Another thing that the Miners seemed to just go away from at times. You've got one of the best, if not the best, receiver in C-USA. The guy implanted super glue on his hands this year. Get him the ball!

Dr. Saturday rates this bowl trophy five out of five of these guys

The trophy - as opposed to some piece of random, postmodern gobbledygook - is a piece of genuine Zia pottery, crafted by a husband-and-wife artist team from their home in the Zia Pueblo. (Another Zia artist crafts traditional leather shields for the most outstanding offensive and defensive players.) True, few traditional tribal pieces feature a crude football player or a corporate logo amid deers, eagles and other native icons, but at least it's not just another pedestal with a football on top of it.

The number of tickets sold is still a mystery for some reason. Guess we will find out on Saturday.

Then this news report says 30,000 tickets have been sold.

Or the crowd could look like last years with sparse attendance. 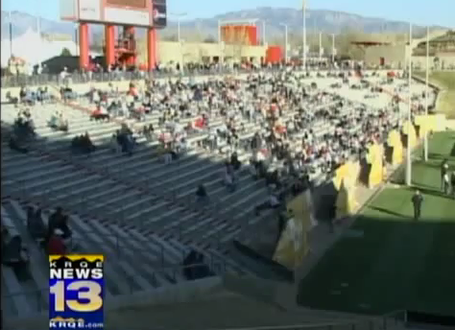 For those unaware Mike Price recruited BYU head coach Bronco Mendenhall out of high school when he coached at Weber State which is an hour north of BYU.