This is the second of a four part series where we exchange five questions with Adam Hoge of SBNation's Bucky's 5th Quarter. Last week we were given an introduction to the Wisconsin program and fan base, and this week we take a look at the head coaches for each program.  To see the questions I answered for B5Q, click here.  The series will run every Thursday until the Rose Bowl.

MWC: Let's say you have been contacted by a major movie studio to develop a movie about Bret Bielema, what is your pitch?   Who would you want to play Bielema and the other prominent roles in your film?  What would your movie be about and what would be the dramatic arc of the story?

B5Q: Well, the obvious title would be: "The Bachelor". Damn, I think that one is taken. Bielema has always has this mysteriousness about him because he's not married. I mean, how many other coaches can you name that aren't married? But as far as the storyline goes, it would start with the success of taking over a program and immediately leading it to its winningest season ever (12 wins in 2006). But then comes the drama. A 7-6 season in 2008 led to many people calling for his job and resulted in him having to makeover the mentality of his football players. To me, that would be the most interesting part of the movie: How did Bret Bielema change the mindset within his program, essentially saving his job and catapulting the Badgers to higher level amongst the nation's best programs? As far as the ending goes, I think we are years away from knowing how it will end. Who would play Bielema in the film? How about Kevin Costner? He's that seriousness with the occasional witty comment. There is enough resemblance even though Costner is much older, but they could make it work.

MWC: My vote goes for comedic actor Rob Riggle who for my money is a dead ringer for Bielema.  Then maybe you could go the Judd Apatow route and make it a sports movie with a little rom/com thrown in. 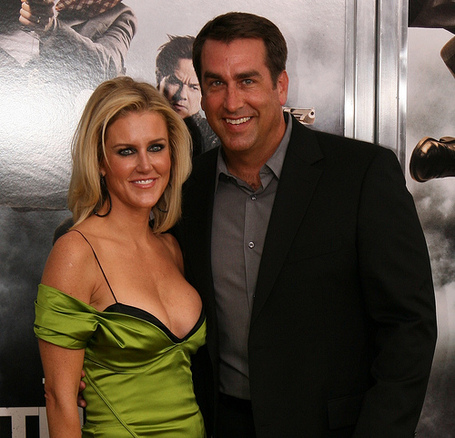 Rob Riggle and wife Tiffany Riggle, The Other Guys Movie Premiere, Ziegfeld Theatre, Manhattan, NY (via Real TV Films)
MWC:  I have seen very little of Bret Bielema other than a correspondent piece he did for "Jim Rome is Burning" and he came off as quite a character.  How would you describe his coaching persona and how is his personality reflected in this squad.  Also what are his general coaching philosophies, meaning what can you always expect from a Bret Bielema coached team?

B5Q: I saw that piece on Jim Rome's show and I have to say he was in rare form. I wouldn't call him a particularly funny guy or a "character" but that was certainly a fun little feature. Bielema is a player's coach, but most of all, he's one of the hardest workers I have ever come across in college football. That's how he had success as a player -- a former walk-on at Iowa who became team captain -- and that's how he's having success as a coach. He's going to out-work you and his players are going to out-work their opponents. As for his teams, you are always going to see a big offensive line that can run the other team over and you are always going to see a respectable defense. He's a defensive guy so even though UW's offense is getting all the attention this season, I don't think you'll ever see a Badger team have a horrible defense.

MWC:  I have noticed that recruiting site Rivals.com seems to pay Wisconsin about as much respect as they do TCU, which is to say little to none.  With so much competition for recruits among the Big Ten region and the lack a fertile recruiting base as a home state how does Bielema consistently field teams that can contend for the Big Ten title?  Which is to say, what are his recruiting strategies and philosophies?

B5Q: Bielema has already established himself as a guy who can get the most out of his players. I think that comes from his work ethic. But he also has shown a knack for finding some sleepers. John Moffitt was a two-star recruit who is now a first-team All-American. Chris Borland was a two-star recruit who was Big Ten Freshman of the Year in 2009 (he's been out this year with a shoulder injury). And James White was back-up running back on his high school team last year who is now the reigning Big Ten Freshman of the Year.

MWC: TCU fans are accustomed to Gary Patterson's name being brought up for every job opening in the nation because people can't seem to believe that such a successful coach wouldn't want to jump ship to a "bigger" job.  Do you have similar experiences and do you have any trepidation that Bielema could leave for another job, and which jobs worry you the most?

B5Q: I'm kind of surprised that Bielema's name has not been thrown out there for some of the bigger jobs, but he's a Big Ten guy who plays Big Ten football. That is to say, his style of bruising football probably isn't what they want in the SEC. I could only see him moving around in the Big Ten and I think he believes Wisconsin can be just as good as Ohio State and Michigan so there's no reason to go elsewhere. If he ever leaves Wisconsin, it will be for Iowa. That's where he played and he still has a Hawkeye tattoo on his ankle. He was noticeably emotional after winning at Iowa this season and I believe a part of his heart is still in Iowa City.

MWC:  When I type "Bret Bielema" into google one of the first things that pop up are the rumors that he dated Erin Andrews.  What's the deal with these rumors, is there even an iota of truth to them and where did they come from?  Also Erin Andrews will be in Pasadena to cover the Rose Bowl and host ESPN College GameDay, could this mean a sexually frustrated and distracted Bielema?

B5Q: Are they true? I wouldn't say they dated, but I've heard from credible sources that they at least hung out a few times off the field. Honestly, who cares? She's a single reporter and he was a single coach (pretty sure he has a serious girlfriend now and all rumors involving Andrews was before the girlfriend). I will say that the rumors started at the 2007 Capital One Bowl where the Badgers beat Arkansas. Andrews was the sideline reporter at that game.