Alert! This is not a joke. The Big 10 really did name their divisions Legends and Leaders, so congratulations to the Big 10 for having the worst division names of all time and for surpassing the ACC for confusion of who is in what division.

So, here is Big 10 Commissioner Jim Delany's logical(?) response to why the division names were chose:

"The Legends, not too hard in that we have 215 College Football Hall of Fame members, we have 15 Heisman Trophy winners," commissioner Jim Delany said in an exclusive interview with The Associated Press. "We thought it made perfect sense to recognize the iconic and the legendary through the naming of the division in that regard. ... We've had plenty of leaders in the conference, that's for sure, but the emphasis here is to recognize the mission of using intercollegiate athletics and higher education to build future leaders."

That is your best answer, Delany paying homage to higher education. We all know this was a money grab, so quit trying to couple education with college football; it is like mixing oil and water.

Here is who is in what divisions, so take notes:

So yeah, good luck remembering who is in what division.

Also, the Big 10 came up with a new logo which is just meh, in my opinion. 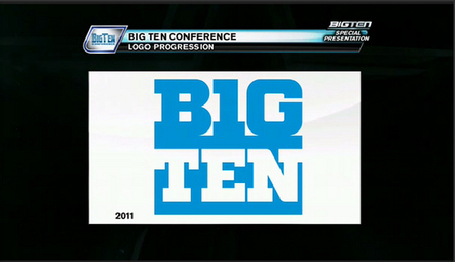 Their old logo was creative while this looks like they forgot their assignment was due within the next half hour tossed this together and all agreed that it did not totally suck.