Against the Spread: Week 6

Share All sharing options for: Against the Spread: Week 6

Oregon State Beavers +8 @ #9 Arizona Wildcats
I am not buying into the hype on Arizona after seeing them just squeak by Cal last week with a last second TD pass.  The Beavers get James Rodgers back this week so the offense should be humming on all cylinders behind QB Ryan Katz who has yet to throw an interception this year.

#11 Arkansas Razorbacks -6 vs. Texas A&M Aggies
Jerrod Johnson will keep this close in the first half then begin to unravel like an old sweater late.  Pencil Johnson in for at least 3 turnovers in Jerry World in a defeat similar to the 47-19 beatdown of last years meeting.

#17 Michigan State Spartans +4.5 @ #18 Michigan Wolverines
This in-state rivalry is more important to the Spartans than it is the Wolverines who seem to to think or the Sparties as an after-thought compared to the Buckeyes.  MSU will come into the "big house" with a chip on their shoulders and keep pace with the speedy Denard "Lil Wayne" Robinson thanks to a stout downhill running attack and a porous UM defense.

Clemson Tigers +3 @ UNC Tarheels
I really like this Clemson team and feel they are in line for a big bounce back game this week after tough losses to Auburn and Miami.  UNC's defense is still depleted from suspensions, their two losses are two very supect teams in LSU and Ga Tech and their two wins against ECU and Rutgers are even more suspect.   Plus Kyle Parker > TJ Yates. 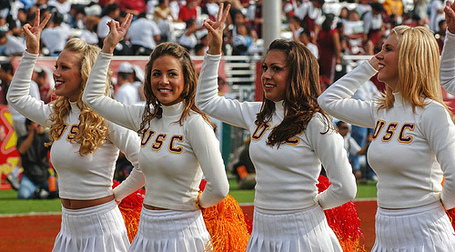 USC Trojans +10 @ #16 Stanford Cardinal
In a battle of two physical pro-style offenses I say 10 points is just too many to give to a talented yet underachieving USC squad.

#5 TCU Horned Frogs -34 vs. Wyoming Cowboys
With the late breaking news that Wyoming QB Austyn Carta-Samuels didn't make the trip to Fort Worth I say lay the 34 while you still can, this will be a massacre.