Road to the BCS: Way Too Early BCS Bowl Projections

Share All sharing options for: Road to the BCS: Way Too Early BCS Bowl Projections

So, here is how those standings occur: 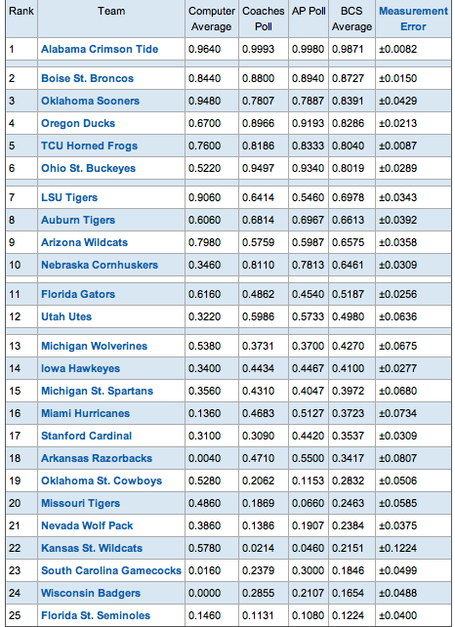 Now onto the bowl projections.

Most of these are self explanatory with the conference tie ins. Here is the selection process from the official BCS website:

A bowl choosing a replacement team may not select any of the following:

4. After steps No. 1, 2 and 3 have been completed, any bowl with an unfilled slot shall select a team from the automatic qualifiers and/or at-large teams in the following order for the games played in 2007 through 2010:

Also, the Rose Bowl gets to take a non-AQ team the first time that the Big 10 or Pac-10 champion is in the BCS title game.  This is a one time occurrence during the four  year cycle. Also, any tie in conference records head-to-head will first be used and then BCS standings to determine who gets the bid.

One glaring thing I see here that it could be two unranked teams with the Big East and ACC champion. Currently, the Big East leader West Virginia (by my opinion because of a tie) is unranked by the simulated standings.  The order was done correctly through the order process and by rankings, with the only exception of the Sugar Bowl who would take an SEC team if given the chance which is why they were taken before TCU.

This also would give the Pac-10 two BCS bids since 2002 when USC and Washington State both went to BCS bowls.