Introducing Your Whack AP Voter Of The Week: Where Iowa Is Six Spots Ahead Of Arizona

Share All sharing options for: Introducing Your Whack AP Voter Of The Week: Where Iowa Is Six Spots Ahead Of Arizona

Pollspeak.com is a great stie to track how AP voters vote.  This week prize goes to Lisa Byington from WLNS-TV in Lansing, Michigan. Perhaps she missed this weeks game or resubmitted the same ballot from last week.  She has Iowa ahead of Arizona by six spots a game which Arizona won, Arkansas only two spots ahead of Florida; even though Arkansas nearly beat common opponent Alabama. She is the lowest on Boise State -- even worse then Craig James I know hard to believe -- highest on Iowa, Texas, and USC. Oh, and LSU is 11th after their escape of Tennessee.

Now on to her ballot. 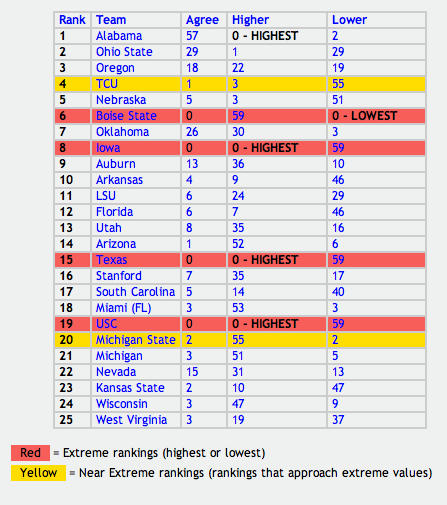 So, can someone explain to me why she has a ballot?