Share All sharing options for: Chris Ello Audio Rant On BYU And Getting Into The BYU Replay Incident

By now everyone has seen, heard or read about the missed call in BYU's win over San Diego State. Here is a reminder.

A lot of San Diego State fans are upset because it was a BYU alum and employee who was the replay official. Now there was quite a bit of outrage on this, because it was a BYU employee in the replay booth. However while this was an oversite on BYU, the Mountain West conference itself sets up the rules and hires the replay officials. Most schools in the Mountain West have alums running the replay booth, but not always school employees, and if one were to inspect other press boxes -- especially in remote areas -- alums wold be running the booth.

Another thing about the BYU alum in the booth who was employed by the league is that he has been in that position since the inception of the Mountain West. So, to throw a guy under the bus as bad as Chris Ello did is not really warranted.

Also, there was another replay incident in the Arizona vs. Oregon State game where the replay official was an Arizona alum and donor to the athletic department, so this is more of a national problem then a Mountain West problem.

Now, here is the audio by San Diego State football radio color analyst Chris Ello said on XTRA 1360. He basically bashes the entire BYU fan base, says that he heard the N-word at the stadium (highly doubt that since he was in the press box calling the game), wanting Bronco Mendenhall and Athletic Director Tom Holmoe to be suspended, and calling for retaliation when BYU comes to town for basketball.

If you don't want to listen here is an excerpt:

"I have talked to dozens and dozens of San Diego State players over the years who will tell you without fact, or without argument, that BYU is the dirtiest, slimiest most ill-behaved football team that they play every single year," Ello said. "The racial comments that are delivered during games -- which would get people arrested in most parts of the world, or at least get the crap beat out of them -- BYU is nothing but a front for utter hypocrisy."

"A lot of what I said on my radio show was kind of drawn from emotion and a lot of frustration -- emotion that, I think, I feel and a lot of San Diego State people feel," Ello said. "That said, anytime you let emotion enter into it, I think you say a lot of things that can go offline, go off-course, and I think a lot of my emotional comments went so far off the course that they kind of missed the target I was intending."

Ello went on to say he probably will never "be a big BYU fan" and "that's probably never going to change."

"My intention was not to attack BYU, but more to attack this particular situation," Ello said.

Still, Ello didn't back down from his allegations of racial slurs.

Even though Ello apologized his statements are way out of line. Being upset over the situation is one thing, but attacking everyone associated with school is a bit much. This is not the same as Max Hall hating on Utah.

Then an unlike source came out in defense of BYU which was Utah's return specialist Shaky Smithson who posted this note on Ello's facebook wall defending BYU. 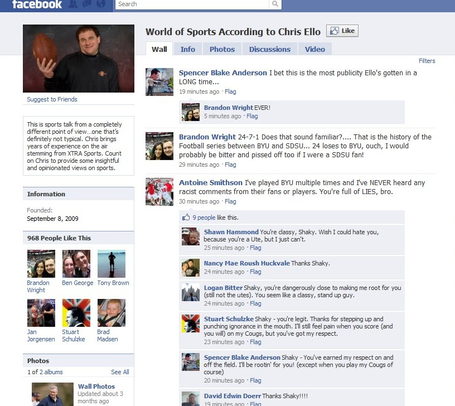