So, here is how those standings occur: 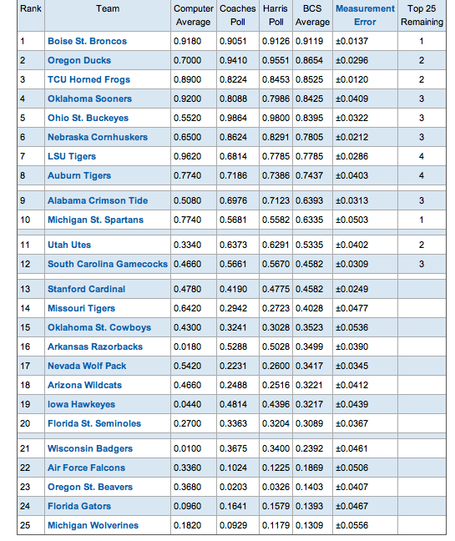 A bowl choosing a replacement team may not select any of the following:

4. After steps No. 1, 2 and 3 have been completed, any bowl with an unfilled slot shall select a team from the automatic qualifiers and/or at-large teams in the following order for the games played in 2007 through 2010:

Also, the Rose Bowl gets to take a non-AQ team the first time that the Big 10 or Pac-10 champion is in the BCS title game.  This is a one time occurrence during the four  year cycle. Also, any tie in conference records head-to-head will first be used and then BCS standings to determine who gets the bid.

This may satisfy more then last week as I went strictly by rankings, and I think would be the way the selection committee picks teams. The only difference could be if the SEC championship game loser gets a bid over Auburn who is the lower ranked of unbeaten SEC teams. The second Orange Bowl slot could be South Carolina if they make it to the title game, because any other team from the East that has a shot to go to the SEC title game is Florida. In my opinion the only way they get to a BCS game is if they win the SEC.

Also I glossed over this but, West Virginia who is currently the best team in the Big East is unranked. How could Bill Hancock say with a straight face that an unranked team deserves to be in a BCS bowl. Go ahead and tell Michigan State, Utah, and Alabama that they do not deserve to be in a BCS bowl over that team.

I don't think the Big East champ would be unranked -- or the ACC -- but I sure want it to happen to show just another flaw in the BCS.

One thing that could be disturbing that I found researching this is the non-automatic auto bid. The rule states that a team that is ranked 3rd from a BCS league, but is not a conference champion they get an auto bid. However, that rule is only for teams within a league with an auto-bid. So, in my scenario it is possible that Nebraska could be chosen ahead of TCU if the Sugar Bowl wants to. I picked TCU because it is more fair, but we all know college football is not fair. This would just be another crack in the BCS.