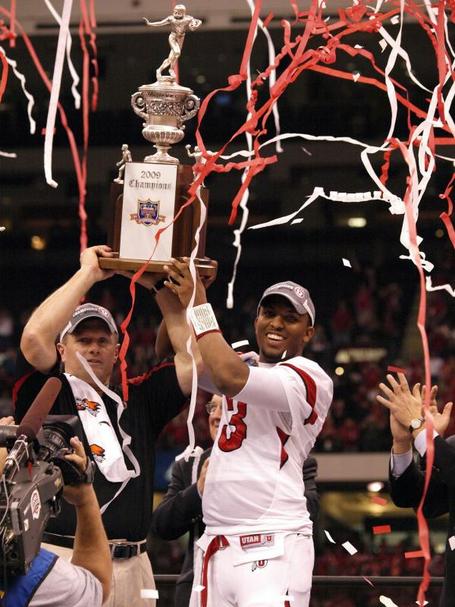 2009 Sugar Bowl MVP Brian Johnson has been named the new quarterbacks coach at the University of Utah.  He would be taking over this responsibility from Dave Schramm who this year was the offensive coordinator as well as the quarterbacks coach.  For a player to be put into a prominent position less then a year removed from the program is a huge risk, because most players who get into coaching start off as graduate assistants.

However, Kyle Whittingham has had good success in his recent hires, and the success of his former Safety and Captain Morgan Scalley could have factored into this hire.  Scalley started off the traditional way as a graduate assistant and has moved up and currently is the safeties coach and the recruiting coordinator only five years removed from his playing days.

Brian Johnson is the second best quarterback in school history behind Alex Smith -- who also lead Utah to a BCS bowl-- and is a very smart player as he basically called the plays in the two minute offense last year.  Johnson was able to spend 2006 basically as a graduate assistant since he was redshirting while recovering from a torn ACL.  That year he was able to focus on film study and helping the quarterbacks that year. The only concern in my opinion is that Johnson obviously has no coaching experience and moves into a spot that is with a top 20 team.

With the way Utah has had coaches interview for other head jobs and losing coaches he could be promoted to offensive coordinator within a few years when he may not be ready.   The one really good thing about this hire is that no former teammate is currently playing quarterback, had Corbin Louks still be around as the starter that would have made things uncomfortable.  Getting promoted may not be a problem since as soon as 2011 Dave Schramm should be a head coach somewhere and Andy Roderick will be the next offensive coordinator, and as a younger guy should be in that spot for a while.

As mentioned the hires that Coach Whittingham has made have worked out to date, so we will see how this newest hire plays out.  One thing I do know is that the fans will love this move.

Currently no official announcement has come from the University, but expect one to come in the next few days.