With the 2009 season in the books, it's time to focus on expansion.  For those who believe the MWC is planning to expand, this is the offseason that we have been waiting for.  If the Mountain West want's to use another teams data in their BCS Evaluation they must expand by July 1, 2010.

Currently we are halfway through the four-year BCS Evaluation cycle.  The Mountain West is in good shape so far, but appears to be struggling with the "final regular-season rankings of all conference teams in the computer rankings used by the BCS each year" category.   Depth is an issue and expansion can help that.

Here is a breakdown of candidates for expansion:

Note:  This is only a football breakdown, since expansion would be focused on gaining a BCS Automatic Bid.

The Broncos are the obvious candidate.  Boise State is a great program and is becoming a national name.  They have won two BCS Bowls in just four seasons.   The Broncos own the nations best record over the past decade going an impressive (112-17.)  Boise State would be a solid addition, that would consistently give the Mountain West another Top 25 team.

What makes Boise State very attractive is their recent success.  The BCS evaluation covers the years 2008-2011.  Boise finished highly ranked in 2008, 2009 and will likely be even better in 2010.  They could really boost the Mountain West's BCS resume.

Adding Boise State would give the Mountain West three additional games each season that would attract a national audience when they play TCU, Utah and BYU.  Yes, Boise State is another "mouth to feed," as many fans put it, but in the long run they will bring in more revenue than they would take.  Boise State has been the subject of nearly every expansion rumor.  Look for Boise State to receive a MWC invite, and play in the league starting in 2011.

If the Mountain West expands to 12 teams, I think Fresno State gets in.  Of all the candidates, they have the best fan support and are also in a decent TV Market.  Fresno State is a solid program, and would rarely fall to the bottom of the conference.  Gaining Fresno State can help the MWC enter the Northern California market, which could help get the Mtn. in more homes.   Fresno is also plays well against BCS schools.

Fresno State was a part of the recent rumors about the MWC expanding to 12 teams.  Although the rumor is belived to be false, I'd expect Fresno to get in if the conference expands to 12.

I don't see Nevada as a very strong candidate for expansion.  They really don't have much to offer.  They are are an improving team and program, but would likely struggle more in the MWC than they have in the WAC.  Their fan support is not very strong and their TV Market is not great.

A positive of adding Nevada could be to provide a conference rival for UNLV.  Also, they are a good geographic fit to the Mountain West.  The Wolfpack was a part of the recent Mountain West expansion rumor, so maybe they can cross their fingers.  I just don't see it happening.

Although Houston is not in the mountains and is not west, they are still a geographic fit for the conference.  Houston could provide a lot of benefits.  They are in one of the largest TV Markets in the country which also happens to be a recruiting hot bed.  Adding Houston can improve Texas recruiting for many MWC schools.  The Cougars also have a decent history in basketball.

If the MWC expands to 12 teams, I like them to invite Houston.  Houston's recent play would help in the BCS Evaluation, and they should be good over the next few years as well.

Tulsa is a team that rarely comes up when talking about MWC expansion.  Maybe it is because they considered out of the MWC region.  They are about as good of a fit as Houston is though.  Tulsa has a decent fan base with decent success.  Their problem is they are the third best college team in a state that has about 3.6 million people.

Tulsa doesn't offer the recruiting and TV market that Houston does.  I think Tulsa is a respectable team, but will not make the cut if the conference expands to 12 teams.

The once respectable SMU Mustangs really have struggled since they were given the "death penalty" in 1987.  With their drastic improvement in the 2009 season, led by head coach June Jones, they hope they will get back to the level the once were at.  They are TCU's rival, and are located in a great Texas area.  They have an excellent past which features 2 national championships won in the 80s.

SMU could probably hurt the Mountain West more in the BCS Evaluations than they would help however.  Their (1-11) season could really pull the conference down, since SDSU also went (2-11) that season.  What makes SMU intriguing is their past.  If they can get back to the level they were at in the 1980s they can be a strong candidate.

I don't think they will get an invite though.  They may get one later if the conference decides to delay expansion, or if the MWC only invites one team and later expands to 12. 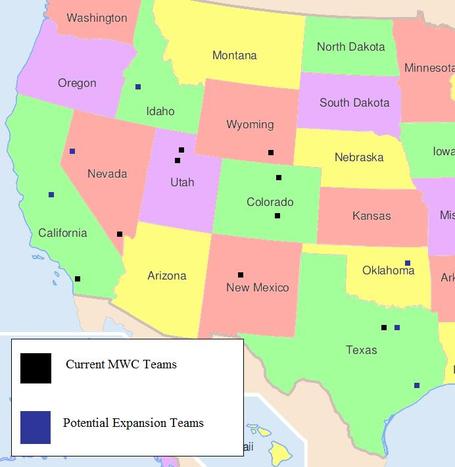