Five Questions With The Ralphie Report

Share All sharing options for: Five Questions With The Ralphie Report

The football season is just around the corner, and throughout the non-conference season here at the Connection and we will be interviewing various bloggers with five questions about the upcoming game.  This edition features the  blog up is The Ralphie Report which is a Colorado blog and they are answering five questions about opponent Colorado State.  Also, check out their site for my answers to the five questions later this week. 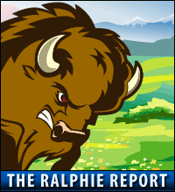 Now that the game is scheduled to be played for the next decade, I don't think the rivalry loses any luster by not playing in Denver one year. If anything, it may add some story lines as the game returns to a college campus.  There is always a different buzz when the game is played in Boulder and as a Buff supporter, in an important year for Colorado, you won't find me complaining about it too much. If I was a CSU fan, it might be a different story.

2. Is Cody Hawkins still the starter because he is the coaches son, or is the QB situation that wide open?

I think the assumption that Dan Hawkins is playing his son just because he is his son is ludicrous and that is not a shot at the question because that is something that has been thrown out by media all over the place the last few years. I don't believe for one second that Dan Hawkins would risk his high paying job or reputation based on a bias. Although Cody (and Dan) catches a lot of heat, he was the best option the Buffs had at quarterback while he has been at Colorado. The argument "he only plays because he is the kid of the coach" only works when there is a 6'5" 230 pound stud with a rocket arm and a 4.5 forty on the bench. In all fairness to a true freshman Tyler Hansen in 2008 and Matt Ballenger, Cody Hawkins was the best quarterback on the team last season. I truly believe the best quarterback for the team will play against Colorado State and, from what I have seen at practice, that is Cody Hawkins.

We have been told that the quarterback competition is wide open and so far, reps have been split pretty evenly to determine who should get the nod. Colorado St. will probably see a dose of both quarterbacks.

While I give Dan Hawkins the benefit of the doubt on the quarterback he plays based on what he has on the roster at the time, that doesn't excuse him for not solidifying the quarterback position via recruiting better quarterbacks, a better game plan, depth around the quarterback, etc.

3. What does Head Coach Dan Hawkins need to accomplish to stay off the hot seat or not get fired?

Due to the financial ramifications of firing a head coach, especially one who just received an extension like Hawkins, it would take a lot for Dan Hawkins to be fired. One or two wins and the department would have to think really hard about the situation but unless the season is catastrophic like a one win total, Dan Hawkins should be back in 2010.

To get off the hot seat, though, he needs to win 8+ games and get to a decent bowl game. This is by far the easiest schedule the Buffs have had since Hawkins has been here and when you look at the next couple of years, it will be the best chance them to get something rolling. He needs to win to recruit and convince prospects that the program is healthy and he will be at the helm.

Hawkins also needs to win some road games, preferably a big one here or there. CU has won two games away from Folsom field since Hawkins took over, which will never get you to elite status. Wins @ West Virginia, @Kansas State, @Iowa State and @ Toledo are not out of the question (no one expects the Buffs to go into Austin or Stillwater and win) and would go a long way towards making the faithful believe the Buffs are headed in the right direction.

4. What needs to improve more for a successful season, the offense or defense?

Easy, the offense.  Both need to improve but hands down, the offense needs to show the greatest improvement. The Buffs have had the worst statistical offense in the Big 12 over the last three years, putting up embarrassing offensive numbers in terms of yards and points. You can expect a 13 - 24 record when you are ranked last in a conference that has turned into an offensive juggernaut.

Better question is will the Buffs be able to improve this season? I think so. The offensive line and running backs are going to be very good. They are much healthier than a year ago and have gained a valuable year of experience. There is also great depth at the two positions. Since the line and the running backs will be better, I expect the quarterback play to improve. A year ago, the offensive line was patchwork at best making any quarterback's life difficult. We all know Cody Hawkins isn't going to light the world on fire but he has the makings to be a solid quarterback and one who can lead CU to 8 wins in 2010.

Wide receiver is concern as well with Josh Smith transferring to UCLA. Right now, Colorado has one wide-out who has caught a pass in a division one football game. That is a scary prospect. But the Buffs should improve in this area when sophomore Markques Simas returns from suspension in the third week of the season and Andre Simmons continues to develop after having to sit out most of fall camp due to a delay in the admissions process from junior college. Simmons is 6'3" 215 pounds and should provide the Buffs with a big playmaker. When we can start to reap the benefits of Simmons remains to be seen but I don't expect Simmons to play a big role in the Colorado State game.

Let's go back to last year to get some perspective on the Buffs defensive line and the uber-experienced Colorado State offensive line. In 2008, the defensive line underperformed to expectations. The Buffs were 7th in the Big 12 in sacks and 54th overall. The team leader in sacks was LB Brad Jones so once again, showing the defensive line's experience last year didn't translate to sacks or quarterback pressure. Also, the Buffs were horrible against the run, ranking 9th in the Big 12 while giving up 166 yards per game.

Against this same offensive line last year and an underperforming defensive line, the Buffs got to Farris 5 times (only 24 sacks all season, over 1/5 of the production in one game) and gave up 71 net yards on the ground compared to an average of 166 per game last season. Yes, this offensive line is very experienced but, for arguments sake, let's not necessarily equate experience with dominance especially considering the Rams lose a lot of talent at running back from last year. That being said, I understand the point that the offensive line improved as the year went on and that is where they gained most of their experience. So I expect them to be better but factoring in the new quarterback and running backs, I am not ready to crown them just yet.

Of course, I am still worried about the Buffs defensive line. Worried in the sense that no one knows what to expect at the position which is better than knowing the line will be horrendous. Last year, the same was being said about the Buffs' cornerbacks but that turned out to be a strength and in 2009, Colorado might have the best set of cornerbacks in the conference. So who knows what will come from the front four.

The Buffs will definitely compensate for the inexperience up front by showing multiple formations varying from the 4 - 3, 3 - 4 and even a 3 - 3 - 5 in passing situations due to a strong back seven. Middle linebackers Marcus Burton (260 pounds) and Michael Sipili (250 pounds, questionable for the game) have really emerged compared to last season and should bolster the middle with their size compared to a year ago. I expect a very active linebacking corp this season, starting with the game this Sunday, to get pressure on the quarterback and aid in the run. I would be very surprised if you didn't see a lot of 3 - 4 to get the most playmakers on the field with blitzes coming from many spots on the field.

Prediction Time - I am always nervous for the first game of the year and with big question marks at wide receiver, quarterback (I am not too worried about quarterback but if I didn't list it, I assume I would be chastised for it) and defensive line, I hesitate from predicting a Buffs blowout. But I ask myself "are the Buffs better than last year?" and the answer is "yes." Considering the Buffs have improved, are healthier and is playing at home, Colorado starts 1 - 0. Score 31 - 20.