5 Questions with Vanquish The Foe

Share All sharing options for: 5 Questions with Vanquish The Foe

With the Brigham Young vs Colorado State game this week I tossed five questions at the BYU bloggers, Layton and sroufe from Vanquish The Foe.  The replies are below and you can catch my response to their questions over at Vanquish The Foe here. 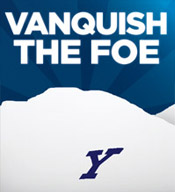 1. What hurt you more in the FSU game, their athleticism or your mistakes?

Layton: I've got to go by what I saw in the game, which mimicked what Bronco Mendenhall has been saying this past week: BYU's mistakes were the problem. He said the BYU defense committed 27 assignment mistakes which they had not make the previous two weeks, not to mention, any time your offense turns the ball over 5 times you aren't going to win the game, nor do you deserve to win the game.

sroufe: You could make solid arguments for either FSU's athleticism or the BYU's mistakes.  It's obviously a combination - but when any team commits five turnovers and forces none themselves it's nearly impossible to overcome.  The most disappointing aspect of those turnovers was that almost all of them could have been avoided. WR O'Neill Chambers' fumble during the Cougars' opening drive was a bad omen and set a tone for poor execution.  Jan Jorgensen's fumble on the kickoff just before half was equally inexcusable.  Max Hall's three picks were all bad - but the last one was under heavy pressure with him desperately trying to get his team back in the game.  In my view that was the least worrisome of the interceptions - the earlier two were simply atrocious.  Mendenhall said early this week that the team's defense committed at least 27 assignment errors.

Oklahoma was every bit as athletic, if not more so than the Seminoles, but it was FSU's approach and BYU's miscues that caused them to have such resounding success.  Where FSU's athleticism visibly hurt the most was with a mobile QB like Christian Ponder.  Still, if the Cougars don't fumble the ball twice in the first half they'd have been in less of a hole during the second half.  Consequently Hall may not have been forcing ill-advised passes and BYU makes it a competitive game.  If the defense makes fewer assignment errors as Mendenhall indicated the Cougars could have kept it close despite Ponder's athleticism and the Seminoles' dominance in the trenches - and the home field would have been a greater advantage to BYU late in the game.  So following these inferences, the Cougars' mistakes were the most costly but their lack of athleticism didn't help either.

If the Cougars commit 5 turnovers and 27 defensive assignment errors against any team, including Colorado State, they'll be in trouble.  Florida State is a very good football team and certainly deserves to be ranked in the Top 20 nationally.  But because of BYU's myriad of errors the Seminoles appeared like they should be competing for the National Championship this season.

2. How will BYU stand up against the deep ball and will they be ready for the gadget plays of CSU?

Layton: This is a great question, and one the BYU defense is still unproven in answering. However, the 3-4 defense BYU runs is designed, when done correctly, to keep everything in front of them. The exciting thing about this year is the cornerbacks and safeties this year are quick enough to actually make that happen.

I've heard that CSU's new offense is patterned after the teams of the 90s, which could spell trouble for the Cougars. If CSU is able to establish the run early it will open up that deep passing game.

sroufe: BYU hasn't been burned significantly thus far with deep balls.  Brian Logan is a major upgrade in terms of athleticism despite his lack of height at field corner.  Brandon Bradley has been solid as well.  Actually, the corners were really the lone bright spots against FSU.  Bradley led the team in tackles and Logan was second.  Overall the secondary is much improved this season from last.  Of course they'll be tested by Rashaun Greer and Dion Morton - but they aren't any better than Jarmon Fortson (FSU), Jeremy Williams (Tulane), Brandon Caleb, or Ryan Broyles (OU).  In terms of gadget plays - we're expecting Jaime Hill and the defense to be well prepared and play hungry following their embarrassment last weekend.  The linebackers in particular should play with something to prove against the Rams.

Layton: It's still too early to be scared by a defense. Even in BYU's loss to FSU, Max Hall and Co., were able to drive down the field pretty easily. CSU's statistics are impressive so far, but they haven't played an offense the caliber of BYU. I expect the Cougars to put a lot of points on the board Saturday.

The one component of that that does scare me is their ability to create turnovers. Being turnover prone is one of the most frustrating things about Max Hall. If he continues to turn the ball over like he has through three games, it could get scary for BYU.

sroufe: I'm not sure there are too many defenses, if any, that could "scare" the Cougars' offense this season.  They put up 28 on the Seminoles despite fumbling deep in FSU territory, throwing three interceptions and only having the ball for 20 minutes.  The concerns with BYU's offense have almost exclusively been in terms of injuries.  The Cougar O-line is thin due to season ending injuries to projected starter Jason Speredon, and Dallas Reynolds.  Now Braden Hansen is expected to miss several weeks as well.  Against FSU the O-line got worn out by midway through the second half - and because the Seminoles knew BYU had to pass to get back in the game they started to blitz more and everything folded in terms of execution for the Cougars.

If the Rams want to keep the game competitive they'll have to pressure Hall and his supporting cast to make more mistakes.  If Hall has time to throw he'll find someone, whether it's Pitta, Jacobson, Unga, Chambers, George, Kariya, Tonga, DiLuigi, Ashworth or Hafoka.  All of those players have proven they can be playmakers if given the right opportunity.  The Rams simply have to force turnovers the way they did against the Wolfpack.  If they don't, BYU's offense can put big numbers up in a hurry.

4. Harvey Unga is playing hurt, but still getting yards.  How would you approach his injury and how do you think he impacts the game against CSU?

Layton: Harvey Unga is fine. He's better than anything BYU has, and he'll probably leave school the all-time leading rusher. Not only that, but he has the ability to play through pain. In his first game of the year last week, he was able to tear up an ACC defense. I suspect he'll have over a hundred yards rushing and a couple touchdowns against CSU.

sroufe: Unga has played in each of the last two contests and then exited early because of aggravating his hamstring injury.  Before leaving against the Seminoles he proved to be the Cougars' best offensive weapon.    If it were me however, I would sit Harvey out completely against Colorado State this week and against Utah State the week following.  I wouldn't let him play until the Cougars travel to UNLV on October 10th.  BYU was able to beat Oklahoma without him and Kariya and DiLuigi impressed against Tulane as well.  Of course, neither can perform on the same level as a 100% healthy Unga - but for BYU to move the ball and score against the Rams (and the Aggies) they shouldn't need Unga.

Still, if Unga does play against CSU, expect more of the same.  He ran for 97 yards on just 10 carries against FSU.  He's also a terror for linebackers to cover out of the backfield and he likes to punish any DB that will challenge him with an attempted open-field tackle.  If Unga plays against CSU he won't be 100%, but he would still make enough of an impact on the game that he'd have to be accounted for by the Rams' defense on every single down he's out there - and that would open things up for the passing game even further.

5. How much do the missions that players go on effect recruiting and the athleticism that BYU puts on the field?  Does it help in anyways?

Layton: I want to be clear that LDS missions are optional, not required.

Onto the question, BYU's recruiting situation is incredibly unique in college football. Under Mendenhall, a system has been established to get the best LDS athletes to BYU, and as a result, they have a constant influx of good talent. They already have 25 commits for 2010, and 4 for 2011. That's remarkable, especially when considering the talent and hype of Jake Heaps (top-rated high school QB), Ross Apo (Texas WR who spurned the Longhorns), Zac Stout (Texas linebacker), etc....

As for the athleticism factor, BYU's team this year is more athletic than any team since 1996, when they went 14-1. What Bronco likes to have is a nice blend of JC transfers and athletic players at skill positions (i.e. Brian Logan and Lee Aguirre at corner) and big, smart players at other positions.

Having said that, BYU's overall team speed must still improve if they want to compete with really fast teams like Florida and Texas...

sroufe: In terms of the school's athletic programs dealing with two-year deferrals for missions, it can often create some major logistical hurdles in terms of recruiting.  Every individual is different, and while most leave soon after their 19th birthday for two years, that isn't always the case.  There are many intangibles.  However, the BYU athletic department has been dealing with these issues for decades and the coaches (i.e. LaVell Edwards) have created recruiting specifications and strategies to incorporate missions into their programs.

In terms of eligibility, the student simply receives a two-year deferral from school and the student has to plan accordingly to when they want to leave and come back. For example, BYU WR McKay Jacobson left on a mission to Sapporo, Japan soon after his freshman season was completed in December of 2006. He returned earlier this year and is currently a sophomore in terms of NCAA eligibility.

In terms of athleticism, again it's different for every individual.  Many don't touch a football at all for 24 months.  So not only is athleticism diminished but the skills developed through years of practice dwindle as well.  Still, many players, like Jacobson, are able to return from the missions with several months before the football season begins so that they have time to get back into shape.  If you have further questions regarding LDS missions and their effects on BYU athletics feel free to start a discussion over at VTF...

Keys to a BYU win?

Layton: Minimize mistakes and turnovers and stay healthy. BYU clearly has superior talent in this matchup, and they'll be hungry playing at home after last week's humiliating loss.