As many of you saw on TV, the MUSS (Utah student section) traveled to Eugene to watch the Utes take on the Ducks.

Here is a little summary of our trip.

Thursday night two buses full of students boarded and drove through the night to Portland.   After a long night of driving and watching the Sugar Bowl we arrived in Portland around noon the next day.  Friday we were free to do whatever we wanted in Portland.  Bryson and I went to the Duck Store that evening to see what it was all about.  The Duck Store was very cool, it was a big store entirely dedicated to the Oregon Ducks.  Following that we went to Buffalo Wild Wings for dinner and watched Boise State beat Fresno State.  We got a lot of attention from the people of Portland because we were wearing our Ute gear.  The Oregon State fans were really pulling for us to win.

Saturday around 7:30 AM the two buses left Portland for Eugene for the big game.  Duck fans could be seen the entire two hour drive down the freeway.  We were watching the Utah Football DVD from 2008 to kill time.

Upon arrival at Autzen Stadium we went to the Utah tailgate.  Ute fans had a very big turnout!  After eating some hot dogs and hamburgers we left the tailgate to walk through the Oregon tailgates.  Despite t he rain there was thousands of faithful Duck fans tailgating outside the stadium.  I was very impressed with the tailgate scene at Autzen.  We were nicely greeted by many Duck fans that welcomed us to their stadium and gave us a lot of respect for Utah's accomplishments recently.  Many Duck fans said that they wanted Utah to join the Pac 10. 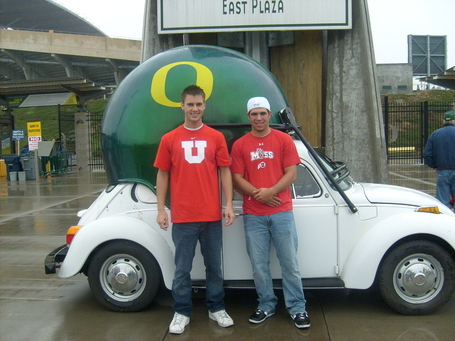 Autzen Stadium was awesome.  It gets very, very loud.  Their fans are on their feet for a majority of the game making lots of noise for their Ducks.  The MUSS took up about the first 15 rows of our section.  There wasn't as many of us as there are at home but it still felt like we made just as much noise.  The fans that were there are die hard.

During one of our third down jumps we broke one of the Autzen Stadium benches!  Later in the game the stadium staff had our carry the bench down the field.  We held it up and cheered loud as the Oregon fans booed us loud. 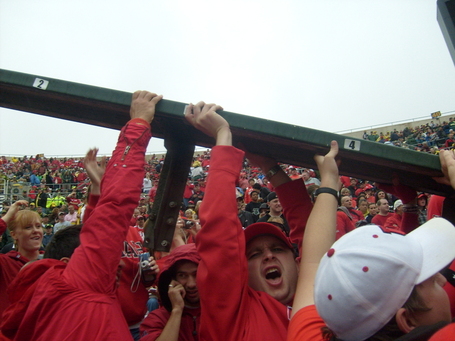 After the loss we were very disappointed.  Loss had become a foreign feeling to Ute fans after 16 straight wins.  After the game Oregon fans were allowed to enter the field.  Unfortunately many Oregon fans came to our section and started harassing us.  It was a very ugly scene.  Security had to get in between the Ducks fans and bitter Ute fans.

We left for Portland very disappointed.  During the bus ride we were getting score updates from the BYU game as they got embarrassed by Florida State.  Most of the Ute fans were happy BYU lost as well but deep down I knew that Saturday was a bad, bad day for the Mountain West Conference.

Sunday we drove home.  Overall it was a great experience.  I loved the atmosphere of Eugene.  That is what college football is all about; too bad we had to leave with our first loss in nearly 2 years.  Most students have put that game behind us and are ready to take on Louisville!