I was able to interview Dan Rubenstein who writes for Sports Illustrated, co-hosts The Solid Verbal Podcast, and a video series called The Post Game Tailgate. He also shares the unhealthy obsession about college football just like the rest of us.

What was the reasoning behind the hype for Oregon this year?  They had one of the least experienced offensive lines in the country, only one returning starter on the defensive line, a new head coach, and a quarterback in Jeremiah Masoli who is more of an athlete then a quarterback.

There were a number of factors behind Oregon receiving what now appears to be too much "hype." Chip Kelly, in his second year as the Ducks' offensive coordinator, improved upon his record setting no-huddle spread attack.
Jeremiah Masoli developed into a quarterback who became a true dual threat by season's end, including games in which he put up numbers, not only on the same level as college football's big three (Tebow, Bradford, McCoy), but arguably beyond (http://www.goducks.com/ViewArticle.dbml?DB_OEM_ID=500&ATCLID=3646890).
Regarding Masoli as an athlete, there's something to be said for that sentiment, but it really seemed like he turned a corner with his passing decisions during those impressive wins (Arizona, OSU, Okie St) to end the season.
Beyond Masoli, the Ducks returned LeGarrette Blount, a back who, in a backup role, rushed for over 1,000 yards and led the Pac-10 in rushing TDs.
Defensively, the Ducks returned nearly every rotation linebacker and two all-conference talent members of the secondary, the hard-hitting safety, TJ Ward, and Walter Thurmond III, the team's best cover corner.
Most pieces were there at the skill positions, sure, but it was also assumed that since the O-line, under Coach Steve Greatwood have had an extensive run of offensive line success since moving to the spread (while plugging in less experienced players), that there would be minimal speed bumps in rebuilding the line. The Ducks' system also relies less on the line giving the backfield time, as the Ducks receive protection in the form of misdirection and quick reads.
In retrospect, any offense needs at least SOME time and SOME holes to run through, which the line has been slow to give, but in watching the second half of last week's Purdue game, there's a glimmer of hope, as the offense finally got rolling.
Regarding Kelly as a new head coach, the transition was expected to be seamless, given the immediate success he had in the program. Plus, he retained nearly every member of the staff when he took over before spring practice.

Is the offense suffering because Chip Kelly is now the head coach and has more responsibilities then when he was only in charge of the offense as the offensive coordinator?

It's not out of the question. There's only so much time in the day to oversee the daily offensive operations. The new offensive coordinator, Mark Helfrich, does not bring previous spread offense experience to the table, but rather a track record for developing quarterbacks.
Kelly has stated that he has been and will continue calling plays all season long, but the quick-hit, creative offensive does appear to be more conservative than it has the past couple years. Some think it has to do with his new on-field vantage point,. but in all likelihood, it's just Kelly getting used to dealing with each and every aspect of being a head coach during major college football games.
I anticipate Oregon's offense becoming more and more potent as the season moves forward and Kelly becomes more and more comfortable.

How is Oregon a 4.5 favorite over Utah who is a top 20 team?  Is the home field advantage that large in Autzen?

In a word, yes.
I think it may be hard to get a read on Utah, given their schedule so far. If Utah is indeed a contender this season to win the Mountain West, and by that matter, win at Oregon, they need to play disciplined, dominant football against supposedly inferior opponents, which the Utes have not.
Autzen Stadium exacerbates everything, good or bad. If a visiting team comes out and is affected by the noise and madness of Autzen Stadium, mistakes seem to pile up. If a team can come in, maintain composure, and move the ball, their confidence will grow.
Even in down years, Autzen is generally worth between 4-6 points, and as we've seen in many years, it's where "great teams go to die." Is Utah great this year? Is Oregon even pretty good? It should be a fantastic Saturday to get answers from both teams.

With Utah's corners struggling against San Jose State will Jeremiah Masoli and the offense be able to take advantage of man coverage Utah will run with their secondary?

Without knowing anything of the talent San Jose State employs on the edge, I can tell you with certainty that Oregon has receiving talent that far exceeds that of the Spartans (with respect due).
Despite the shortcomings that the Ducks have shown through two games, it's impossible to argue that Oregon is stacked with speed. Everywhere.
Jamere Holland (WR) and LaMichael James (RB/WR) were state track champions in California and Texas (good states to be fast in) and will be on the field constantly. The Ducks also use Ed Dickson (probably the fastest TE in the Pac-10) on the outside, which has caused matchup problems with opposing linebackers.
The questions here are whether the hands will be consistent and if Masoli is able to make the proper reads and not zone in on receivers, an issue he's had this season.

What is Oregon going to do defensively against a Utah offense that has so many weapons and is able to beat teams with the run and the pass?

I'd like to know myself.
The Oregon defense has done very well against the run these past few seasons and conventional wisdom would have you think that if the Ducks are prepared to defend any offense, it would be a spread/option attack, an offense the defense sees every day in practice.
The (debatable) 4-2-5 system is based around speed, which is obviously a key factor in preparing against a spread system.
Thus far, the Duck defense has shown lot of looks with three down linemen in order to get more speed on the field. While this has led to improvement in a number of areas, there were repeated cases of Oregon defenders springing free, but taking bad tackling angles or simply missing tackles (a problem the Utes have also had).

This is a little inside to the general reader, but not if they listen to the Solid Verbal podcast.  Which Cougar will have the best season?  Houston Cougars, BYU Cougars, or Courtney Cox who is the star in the new show Cougar Town.

It's a good question. As anyone who has listened to the podcast knows, I do love all incarnations of the frisky feline.
I like Houston's schedule and whatever it is that makes Case Keenum stockpile passing yardage like he's hoarding for winter. Tulsa on the road looks to be their biggest challenge, but you can't say Houston isn't road tested already.
BYU has far more obstacles (TCU, Utah, FSU, UNLV, etc) on their road than Houston, but ultimately, if they can push forward and make it through their schedule unscathed, Provo's Cougars have a much more compelling BCS case.
As for Cougar Town, I'll give it a shot based on the subject matter (hey, I gave Desperate Housewives four episodes on the title alone) and the track record of Bill Lawrence (Scrubs), the show's creator. If nothing else, a scantily-clad Courtney Cox never hurt anyone.
To my knowledge.

Another inside question from the Solid Verbal, what shirt would you want to wear?  The three wolf moon shirt, three keyboard cat moon shirt, or the three Holtz moon shirt.

The Three Holtz Moon shirt and it's not even close. The key would be to get the shirt on some sort of celebrity (I'll say John Stamos) so stores start stocking the shirt and it becomes the shirt to own in 2010. It'd be the No Fear of the new decade. 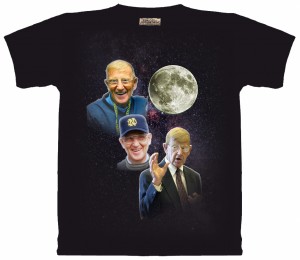 Will the Oregon defense do anything special against QB Terrance Cain who is making his first road start in such a hostile environment?

A good gambling strategy has been to avoid wagering on inexperienced quarterbacks making their debut in Autzen Stadium. Obviously, Kellen Moore did everything he could to disprove that line of thinking last season.
Like I said earlier, Oregon's defense will be prepared for an athletic QB and should be well versed in its containment responsibilities.
My guess is, besides the crowd noise, Oregon will throw a number of different looks from different angles to try to confuse Cain in what will surely be the loudest, most hostile stadium he'll see all year.
The key for Cain will be whether or not he tries to force things early to try to take the crowd out of it. In my estimation, the teams that have had the most success at Autzen are those that don't turn over the ball and are able to stay disciplined within their schemes.

Who wins this game and why?

Oregon's due for a lopsided game, though I'm not positive in which way it'll be lopsided.
If Utah can consistently run the ball and play turnover-free, I see very little opportunity for the Ducks Saturday, given the offensive inconsistencies and the amount of time the defense has been on the field in Oregon's first two games.
Similarly, if Oregon's offensive line can get a consistent push and Oregon can control the game on the ground, there could be reason for hope in Eugene. Obviosuly, if Oregon can run early, Utah will stack the box, further putting Utah's corners on an island, something not many Ute fans are excited about.
I like Oregon 37-24, but I'm not sure why, beyond blind optimism. If pressed, I'll say Oregon can move the Utah D-line enough and the Utah secondary will be further exposed by the Ducks' speed.
In any case, we'll know far more about the direction of both teams after Saturday's matchup, which, at this point, I'll take.

There you have it Dan Rubenstein who can be found nearly everywhere on the web from SI, The Solid Verbal Podcast, and The Post Game Tailgate.  So, be kind and check his work.