Editor's Note: The SBN tech team has endowed us with an amazing site platform with a lot of great features that help foster a strong community. We will be highlighting them as a refresher for older commenters and as an introduction to the tons of new members we've picked up.

There's no doubt that this platform has a lot of toys that we don't use nearly enough. FanShots are probably the least used aspect of the site even though it can be one of the best tools. This helpful guide will hopefully answer the age old questions of what FanShots are for (quick hits), how to make really good ones., why there are 5 kinds (it pays to have options), and what the "chat" one does (no idea).

So join me after the jump for all you've ever wanted to know about FanShots. So help me Wendel if you do something wrong after I post this user's manual. Thanks to Beyond the Boxscore  and Pension Plan Putppetsfor some help.

If you have any questions ask them in the comments.

What Are FanShots For?

FanShots are a great way of sharing anything interesting Leafs or even NHL related. Hopefully all of the Barilkosphere posts will get into the FTB and any new ones should get posted in the comments but if you find a great MSM article (or even a particularly bad one), a good quotation, a YouTube video, a good image, or anything that you stumble across on your trip around the interwebs that you think Leafs fans would appreciate. One caveat: if it's breaking news make sure that it hasn't already been posted.

They differ from FanPosts because they are much less involved. If you are writing a FanPost with a link and filler to hit the 75 word minimum then you should be posting it as a FanShot. Same if it's one picture. Anything where you are just adding a paragraph or two of explanation probably means that it should be a FanShot.

In the interest of maximizing the exposure of your FanShot here are some tips to maximize your efforts:

Not Good: "Declining Into Obivion"

It would have to be the only explanation right? More importantly, I know who the article's about, what it's about, and why it was written.  I'll at least click through to the full FanShot.

I can't read the text at this size, the title doesn't make sense in isolation, and the graphics don't tell me anything other than someone's comparing a linear model to a slightly non-linear model. Not to mention that it's about baseball. Boo-urns. 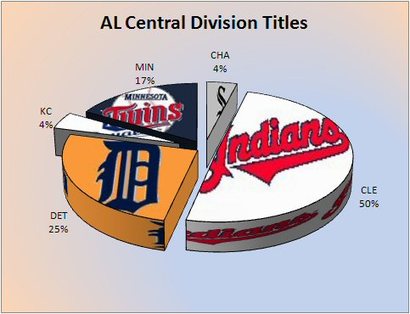 Right away, Godd Till wants you to know that the Tigers are second best at something. The text is a little small, but it's not even necessary.  After noticing that the Indians are a strong favorite to win the division, I find myself wondering who's making that claim...  Boom, I'm hooked.

Sure, just name-dropping Damien Cox with a positive note might be enough for some people to think that you're insane but you're making me click through in order to find out anything about the article.

Dan Szymborski gives us a great new tool for modifying a player's pre-season ZiPS projection based on his current performance. I think he is just using Bayesian inference, so the numbers won't take into account specific changes in approach/velocity/injuries or anything else that isn't necessarily captured by the numbers.  However, it is still a great thing to have.

Dan also offers a spreadsheet that you can download here, which allows you to input your favorite player's current stats and their name to get their updated projection for the rest of the season.

For example, thanks to his .250 wOBA so far this year, BJ Upton -- BtB's favorite player -- is now projected to have only a .354 wOBA for the rest of the season, as compared to his .367 pre-season projection.

That's a lot of detail. That'll hopefully get people to go through to the article but if not they'll at least be able to comment on the FanShot.

Do you have any other tips to throw out there?  Anything else about a FanShot that makes you more likely to check it out or start leaving comments?

How To Make A FanShot

I put how to make a good one up top because that's close enough to the top that those familiar with the 'how' of FanShots are likely to still read it. For the Whopper Jrs. here is how to make a FanShot in 11 pictures. That sounds like a lot but it's a piece of cake. 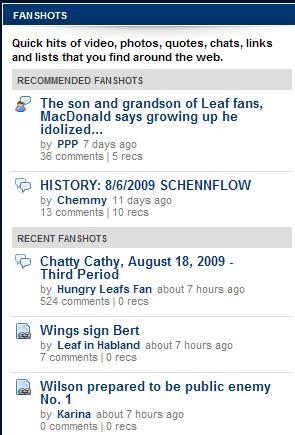 The FanShots are group in the left sidebar below the FanPosts. You can rec them just like comments and FanPosts.

Or you can get at them via the top toolbar. 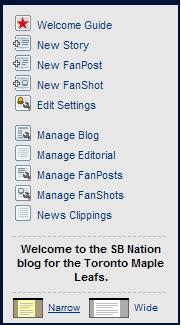 Here's my sidebar. You guys have scaled down version. Click on "New FanShot" to start and then you have options 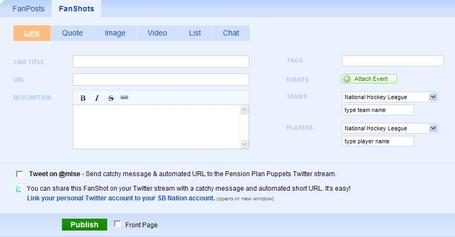 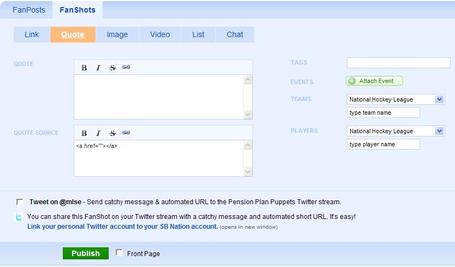 This is great if you want to highlight a specific excerpt from an article or a specific quotation.
You can add the link in the second part. 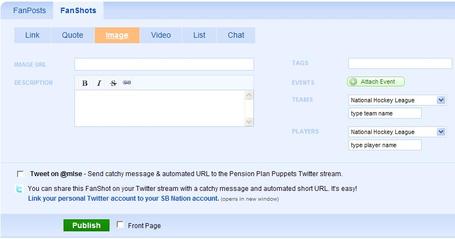 The important thing to remember is that it can't be a blogspot image. Don't know why but they don't work. Otherwise, if you have a picture to share just make sure to include a link to the full-size version 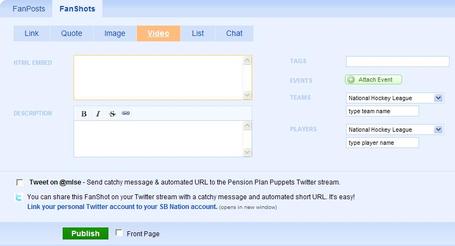 This is where you grab the embedding code from YouTube videos or LeafsTV. Instead of posting a link click on share on LeafsTV or NHL.com clips and get the video up. 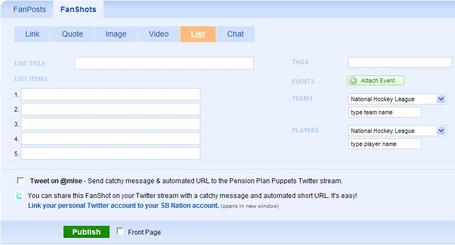 Have a list you want to start discussion? This is the place. Top 5 fanbases? Top 5 Leafs centremen of all-time? Throw 'em in there. 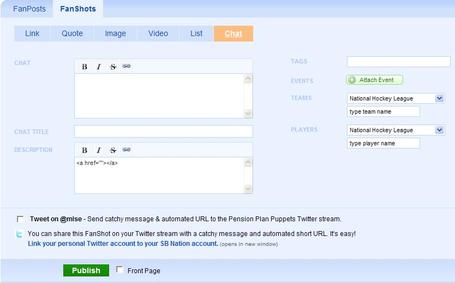 Honestly, we only use this for the Chatty Cathys. I have no idea how to use them otherwise.

If you click FanShots on the top toolbar you can sort them by type. This makes searching a little easier. You'll also notice the Share on SB Nation icon. If you add it to your Favourites it will make the entire process that much easier. 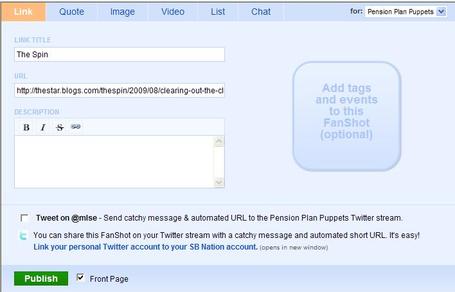 Once it's installed, you click on it when you're on something interesting and it'll start the process for you.

So there you have it. One post that tells you all that you've ever wanted to know about FanShots. Hopefully everyone takes the time to read it, asks any questions, and continues the excellent use that we've seen so far. This guide should help you to make them better and in the end that benefits all of us.