The biggest recruit to come to San Diego State since Marshall Faulk QB Tyler Bray is switching his commitment to Tennessee.  Bray who is a four star recruit and ranked 115th in the nation, 32nd out of California, and the sixth rated pro-style quarterback in the nation.

Bray originally orally committed to San Diego State over Tennessee and USC back on July 28th and said this about his commitment:

"I got the offer from Tennessee, but I'm still going with San Diego, so that's good for right now."

"I'm a great fit,(SDSU runs) a pro-style offense, which we run a little bit at my high school, so that's nothing new for me. The campus is great, the facilities were nice and it's great weather down there."

This loss is not to be underestimated for the Aztecs, because this news is making waves on all the Tennessee sites and is considered their biggest pick up since Bryce Brown arrived in Knoxville.  Besides being a top recruit himself the Aztecs lose the opportunity to lure in other top recruits who want to play with this type of player.

This is exactly what happened at BYU when they received a verbal commit from number one rated quarterback Jake Heaps.  He was able to bring in other top recruits and most notably WR Ross Apo who changed his committment from Texas to BYU.

That impact is what San Diego State was wanting when they received his oral commitment.  There are other reasons that Bray made the move.  For one, he never attended a game at San Diego State; which is possibly a good thing because from what I have heard from players who chose Utah or SDSU is that it felt like a high school game with a stadium that was sparsely filled.

Part of the reason for the switch is that currently at San Diego State the quarterback is Sophomore Ryan Lindley who is really good and most likely would not be unseated by a freshman; even if Bray was to enroll early as planned.  He would have had to sit two years behind Lindley.

However the move to Tennessee allows him to compete right away because Vol fans are not to thrilled with fumble-itus quarterback Jonathon Crompton who is a Senior.  Here is one of Tyler Bray's quotes on why he made the move:

"They say football is a religion in the South and that's definitely true," Bray said. "The fan support and how passionate everyone is just blew me away. I love the coaching staff and the energy everyone has there."

"...it's just a great fit for me from a football standpoint. They don't have a lot of depth at the quarterback position and they didn't sign a quarterback last year. I want to graduate early so I can enroll in time for spring practice and they want me to come in and be ready to compete for playing time." 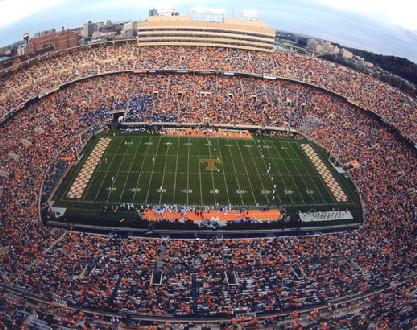