What! The Coaches Poll is Biased?

Share All sharing options for: What! The Coaches Poll is Biased?

With the coaches going back to the lock and key on their post season ballot starting in the 2010 season there was an uproar, because their was speculation that coaches can now go back to favoring their own team and conference.

That bias all ready exists, and Andy Staples from Sports Illustrated is going all American on them by enforcing the Freedom of Information Act.  Staples and SI would send out requests to each public school that votes:

So beginning Tuesday [August 25], SI.com will file records requests with the employer of each of the 51 public school coaches who vote in the 2009 poll. If the schools comply with the law, we should get a look at every ballot. Legal action may be required if schools refuse to comply, but if a recent case involving Florida State and the NCAA is any indication, judges likely will support the people asking that highly paid public employees be held accountable for their actions. Every ballot we receive will be published.

With that being addressed, the coaches poll has been out for some time and there was all the talk about how zero Big East team made the cut.  However South Florida --from the Big East-- coach Jim Leavitt was one of the first schools to comply with SI and rrelease the coaches ballot, the other was Air Force's Troy Calhoun. 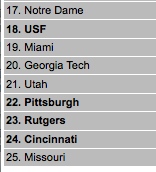 Their are some oddities in Coach Leavitt's poll such as having Florida State --whom they play-- ranked at number ten then putting Oklahoma ahead of Florida.  The biggies are highlighted in the chart, with Coach Levitt putting South Florida --his team-- ranked 18th which is worth eight points; the total number of points which USF accrued in the coaches poll was eleven.

Then there is voting for three other Big East teams --Pitt, Rutgers, and Cincy-- in the top twenty-five, but no mention of West Virgina which made the top 25 cut by the consensus, and the slim projected winner of the Big East, while the Bulls were fifth.

So, we are supposed to believe that the coaches are not biased, and the Germans really did bomb Pearl Harbor.

I voted us [Cincinnati]  25th in the preseason poll. I think the preseason poll is based on what you did in the past and we finished in the Top 20 the last two years. I think that earned us an opportunity to be a Top 25 team. Now that that has been established, go play yourself into it. I had three Big East teams in the Top 25. I voted Pitt 17th, West Virginia 22nd and us 25th.

Umm... coach the polls are for the upcoming season and on each ballot sheet should be the note past performance does not indicate future success.  That should be the creed of these meanigful polls that go 1/3 toward choosing the two participants into the BCS title game.

While that will never happen since preseason votes are based on the schools pedigree, coaching success, and returning personnel.  Cincinatti should be filed under those categories since they have only been in the Big East since 2005.

These votes that have been released are just proof that the coaches do have an agenda, and are too biased -- or have the time-- to vote in these polls.  The real crime is not that the ballots are secret, but that coaches who have no time to accurately tell how good teams are get to help determie who plays for college footballs biggest prize.