Robert Benjamin Is Number One QB at Wyoming... For Now

Share All sharing options for: Robert Benjamin Is Number One QB at Wyoming... For Now 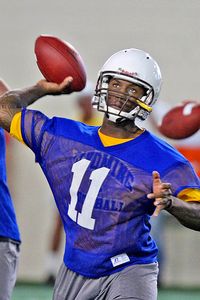 The 2009 season for the Mountain West looks to feature four new quarterbacks and today another quarterback depth chart is produced.  This time it is at Wyoming who is naming junior college transfer Robert Benjamin to the number one spot on the depth chart with Senior Karsteen Sween as the backup.

Prior to coming to Wyoming Benjamin was the National Junior College Athletic Association Region I Offensive Player of the Year at Phoenix College.  So, he has the skills but it is concerning for Sween because Benjamin did not enroll until July because of issues with his grades.

By no means is Sween a slouch in the latest scrimmage Sween threw for  for 122 yards and a touchdown while completing 75 percent of his passes, and Benjamin completed 12 of 17 passes for 178 yards and three touchdowns plus he rushed for 62 yards.

Benjamin is a Dave Christensen recruit and is more of type of player that is more suitable to run the spread attack which Christensen ran at Missouri.

This is not a final decision, but is rather similar to the situation at Utah where coach Kyle Whittingham who made a depth chart and made it clear that the quarterback situation is not finalized.  Sween could still become the starter for the Weber State game, but as of today Robert Benjamin is the Starter.

In other quarterback news around the Mountain West BYU named their backup Riley Nelson who transferred from Utah State after serving a two year Mormon mission.  To me this seemed obvious to choose Nelson over Brenden Gaskins because out of high school Nelson was a Parade All-American and started as a true freshman at Utah State.

On to the important quarterback battles with Colorado State who previously had four quarterbacks in the race, and now it is down to three, but Coach Steve Fairchild is not impressed with any of the quarterback play in the recent scrimmage:

"Tell Dan [Hawkins] if we were playing tomorrow, it would be silly of me to call a pass play [with] the way our quarterbacks are playing. It was the absolute worst practice in my 30 years of coaching that I've seen at quarterback."

Talk about a lack of confidence from the coach.  The combined numbers for  the three Grant Stucker, Jon Eastman and sophomore Klay Kubiak weren't bad during the scrimmage as they passed for 17-of-24 for 269 yards, four touchdowns and just one interception.  Klay Kubiak looks to have a slight edge, but his surgically repaired shoulder is still sore after practice and at times he has to leave practice early and may not be physically ready to start.

Fairchild has made it clear that the quarterback situation is in bad shape and said this at the Mountain West's Front Range Kickoff Luncheon in Denver on Thursday:

"All they've got to do is put together just an average practice or two in a row, and they'll be the starter, but nobody's done that."

Air Force also has a quarterback quandary and at the end of spring it was considered to be Tim Jefferson who started eight games and then Asher Clark who played running back in 2008 is now going back to quarterback which he played in high school.  Now there is Connor Dietz who spent his freshman year on the junior varsity squad at Air Force and played quarterback as well and now is in contention to be the starter for 2009.

Coach Troy Calhoun has not made a depth chart for the three quarterbacks, but seems pretty high on Dietz.

"It's helpful to have played some snaps, but at the same time nobody has more experience at running this kind of offense than Connor Dietz, at least in terms of the number of games he's played."