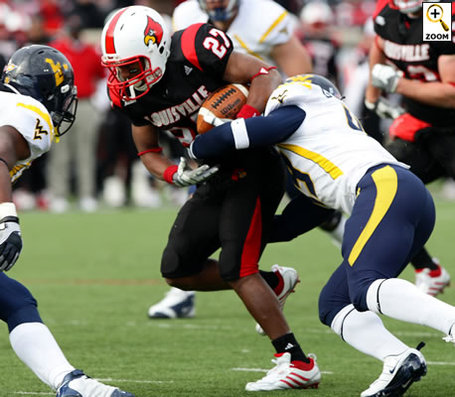 Louisville has not been the same since their Orange Bowl in 2006 and since then have a combined record of 11-13.  2006 happens to be the year Bobby Petrino left the program for the NFL and then Louisville brought in Steve Kragthorpe from Tulsa.

Kragthorpe was to continue the high flying, pass happy scoring offense that he made famous at Tulsa.  Instead the team has struggled offensively and has yet to go to a bowl game.

This year seems no different as Louisville is predicted to finish seventh by the preseason mags.  The good news about the Big East is that there is no clear cut champion, which means that Louisville could sneak out an extra win or two with all the parity expected for the league.

The offense should be improved with four starters back on the offensive line and eight overall.  They do lose quarterback Hunter  Cantwell, but the offense will be lead by potential all conference running back Sophomore Victor Anderson and wide receiver Doug Beaumont.  Anderson gained just over 1,000 yards and eight scores as a freshman which was good for fifth in the Big East.  The running game looks to be the only sure thing for Louisville in 2009, who need all the help they can get.

The quarterback play last year was not great with Hunter Cantwell slinging the ball around.  He only averaged 207 yards per game and had 16 touchdowns and intercetpions.  The production drop off from 2007 to 2008 was over 1,400 passing yards when Brian Brohm was on campus.

The hope for 2009 comes from NC State transfer Justin Burke who will be a junior entering the season.  Burke was a three star recruit and rated the 16th best quarterback in the country coming out of high school in 2006.  He did play in three games in 2007 for NC State, but only completed two of three passes for fifteen yards. The hope is for Burke to bring his magic from his Kentucky high school days where he 62 touchdowns as a senior.

The defense was bad last year and ranked seventh in the Big East, and some how defensive coordinator Ron English got the head coaching gig at Eastern Michigan.  So, Louisville brings in Utah State head coach reject Brent Guy, and hope he can bring something new to the table.

The only position with strength is the linebackers that return all three starters and the backups, but the rest of the defense is questionable at best.  The Cardinals desperately need a pass rush as they were dead last in the Big East with only 14 sacks, and were sixth in takeaways.

The only other good news to be found for Louisville is that of the new starters four of the six are upperclassmen with playing experience, so there is some hope for them.  The goal should be to get back to a bowl game, but that is an unlikely scenario and five wins looks to be where Louisville maxes out.