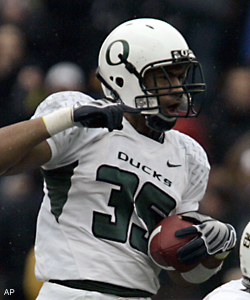 This off season brought in some changes for Oregon with Chip Kelly being promoted from offensive coordinator to head coach, and former head coach Mike Bellotti is now the athletic director. Oregon is the last team not named USC to win an outright conference which happened to be in 2001.

The Pac-10 typically plays a pretty strong out of conference schedule and Oregon may have one of the toughest with a road game at Boise State, home for both Utah, and Purdue. Purdue could be consider an easy win but not when you consider that many, many schools schedule directional tech for a gimme win.

Their preseason ranking varies from a near consensus in the mid teens, or Phil Steele who has Oregon ranked 40. Part of the reason for Steele's ranking is his importance in the line play. Oregon has only twenty career starts on the offensive line --that comes from one player-- which puts them 118th out of 120th in all of college football.

The line will consist of Junior Bo Thran who received multiple offers from other Pac-10 schools, Sophomore Mark Asper who just returned from a two year LDS mission, Junior Jordan Holmes who's only offer came from Oregon, Freshman Carson York who is a four star recruit, and the only returning starter is Junior CE Kaiser.

The recent success of the Ducks is their running the spread option and with the right players have been deadly. The last time the offense was great was when Dennis Dixon ran the show two years ago, but ever since his injury in that Arizona game Oregon has yet to find the 'next' quarterback to run the offense.

The offense is still very productive by ranking in the top 10 in scoring offense in 2008. The 2009 version should still be one that scores a bunch of points, even with the loss of quarterback Justin Roper who transferred to Montana. The quarterback position is their deepest position and starts with Jeremiah Mosali who after struggling to pass the ball last year, actually picked it up in the last three games.

Others at quarterback are Nate Costa who started last year before suffering a knee injury then there is sophomore Darron Thomas who played in the Boise game after the first and second quarterbacks went down, and he did well by throwing for 210 yards and three scores. So, the Ducks are taken care if one does happen to go down with an injury.

With the spread option the Ducks have another chance to have two 1,000 yards rushers starting with returning back LaGarrette Johnson who had 1,201 yards, and then the potential other thousand yard back is redshirt freshman --and former four star recruit-- LaMichael Johnson.

The receiving crew has a potential star in the making with Jamere Holland, because of his great spring oh and he is really, really fast. The Ducks lost two of their top three receivers, but that returning wide out is Ed Dickson who was a deep threat with 14.5 yards per catch. In this offense with the way the ball is spread around any receiver with any talent can become a star in this offense.

The defense only returns five starters, but there is some pretty good talent filling in those other six spots. The defensive line was a strength last year, but with the loss of three of four lineman, and two to the NFL draft make the line a potential short coming this season.

The returing starter is Will Tukuafu who had 7.5 sacks and 17 tackles for loss, however being the only starter back on the line means there will be more double teams. Those potential double teams could lead to less production by Tukuafu but open up opportunities for others.

The biggest impact newcomer is junior college transfer Bryon Littlejohn who was an All-American linebacker. Even with that talent Littlejohn may not even start because the linebacker position is the deepest on the team, but it will be hard for Littlejohn to not see some action on the field.

The Ducks have a legit shot of taking down USC for their first Pac-10 title since 2001 because USC is starting a new quarterback, and has to replace eight starters on defense. Even if they do not over take USC a 10 win season is a realistic goal for this year.