Share All sharing options for: If College Football Had a Playoff: #14 Central Michigan Chippewas @ #3 Cincinnati Bearcats

Before we get to game the next game the previous matchup of Boise State vs. Virginia Tech came down to the end with the second upset of the playoff with Virginia Tech gathering their troops to defeat Boise State.

This last game of the first round features MAC champion Central Michigan facing off against Big East champ Cincinnati. This game will see a lot of fireworks since both teams will be looking to throw the ball a lot, and with not much defense being played a combined score above sixty should be expected. This would not be a push over win for Cincy.

Using the simulator What if Sports the projected final outcome would be 55-38 in favor of the Bearcats. Not an unexpected outcome since Cincy allows a lot of teams to score points. Both quarterbacks would have very good days but throwing for multiple scores, but the difference came down to Cincinnati being able to run the ball on the Chips.

Now it is time for the fan vote to decide who moves on, yes that is you. Check back daily at 12 PM eastern time to vote for the next matchup, and voting is only for 24 hours. As they say in Chicago vote early and vote often. 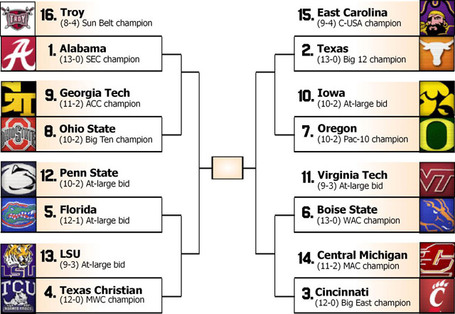