Stastical Comparison of the 2009 Poinsettia Bowl: Utah vs Cal

Share All sharing options for: Stastical Comparison of the 2009 Poinsettia Bowl: Utah vs Cal

The 2009 Poinsettia Bowl will feature Cal vs No. 23 Utah. The Utes will be looking to hit the 10 win mark, and extend the nations longest bowl winning streak to 9 games.

Cal started the season highly ranked with hopes of winning the Pac-10. After a somewhat disappointing season they are looking to end on a good note, rather than a 2 game losing streak. Cal's best player, Jahvid Best, is still recovering from his tragic fall against Oregon State. Whether he will play or not is still being determined.

Here is a statistical comparison of Utah and Cal: 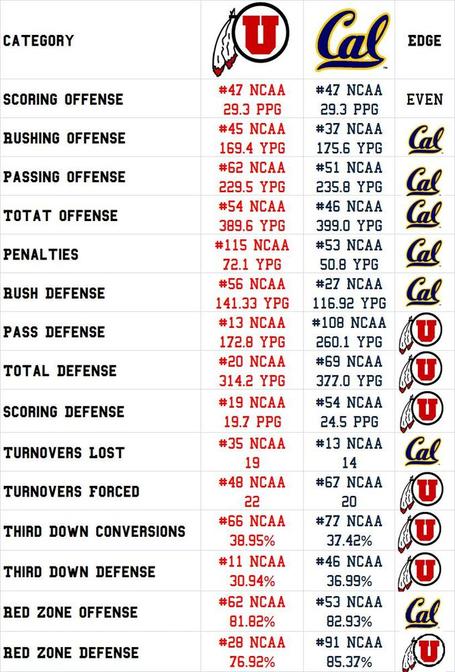 Each team leads in 50% of the statistics used. Basically, Cal is a better offensive team and Utah is the better defensive team. Cal's numbers may be less if they are without Jahvid Best.

Although Cal does have the offensive advantage, Utah is not far behind only trailing them by 10 yards in yards per game. Defensively Utah has a much bigger lead over Cal. Utah allows 63 less yards per game than Cal.

Utah is going to have to do better with penalties in this game. The Utes are ranked last in the country in penalties against ranked teams, and teams with a winning record. Against TCU, BYU and Oregon, the Utes gave up an average of 107.7 yards per game in penalties.

California did play a stronger schedule than Utah, so you can expect their numbers to be less. Utah's strength of schedule ranking was 86 and Cal's was 58.