16 Team Playoff There is No Reason to Not Have One

Share All sharing options for: 16 Team Playoff There is No Reason to Not Have One

No one can argue that college football has the best regular season, but they also have the worst post season in all of sports - maybe for soccer but at least they settle it on the field.  Time to make my case for a college football playoff and how it would look. My version would be a sixteen-team playoff that includes all conference champs with five at large spots - sorry Notre Dame unless you join a league you will need to be ranked high enough, I heard the MAC wants a 14th team maybe you could go there win there.

This model would give each and every league a legitimate chance to play their way to a national title instead of deciding it on paper. Now realistically the champion will come from the current BCS leagues 95% of the time, but who knows what would have happened to the two Utah teams or the 2006 Boise State squad that won their BCS games with not a sniff at the national title.

Besides having four great weeks of college football there would be more competitive teams since there would be a trickle down effect of talent similar to NCAA hoops where some players rather go to a school where they can play early.  Now, that will not mean the Sun Belt will start getting four and five star talent, but a talented player here or there may go to a ‘lesser' school for early playing time.

There will be those people that will say this water downs the regular season, but I disagree because like the current BCS teams must win their league to get in.   Plus, with the pressure to not have to go undefeated to get to the national title game the paying season ticket holders may no longer have to suffer through playing Tennessee Tech, Liberty, or insert your directional tech FCS school, and replace them with possibly an intersection game feature two ranked teams.

BCS advocates may counter that the end of the season rivalries may not mean as much if teams have a playoff spot locked up and rest their players in that game.  However, the difference between a three seed and four seed is playing the C-USA or MAC champ that if ranked would be in the 20's or playing at-large Pitt or LSU.  So, yes the regular season integrity would still be intact.

As for those five at-large spots they would still primarily go to the bigger leagues with more deserving teams with an occasional second bid to the Mountain West.  The first round would have some blowouts with a #1 vs. #16,  #2 vs. #15, or #3 vs. #14 but this year Central Michigan would be a #14 seed and could give TCU all they could handle with Dan LeFevour and the Chips passing offense.  Who would not want to see a George Mason run to the final four of a college football playoff?

The arguments that the season would be too long as the BCS reminds us that these football players are first student and athletes second (yeah right).  Then why is Alabama shutting down the university for three days when the team is in Pasadena for the title game, or ask why Florida State closed school from Wednesday to Friday for Thursday night games.  That argument that the players would miss too much school time is a crutch; baseball players leave nearly every Wednesday through Friday during the season to travel, and play till late June if they make it the College World Series.  What about the NCAA hoops tournament where the players are missing classes from Wednesday through Friday for at least one week and sometimes two if they make it to the second round.

Last time I checked football was played on Saturday's and if a playoff games would be on a Friday and Saturday for the first two weekends.  The scheduling is an issue that people complain about with too many games being played, but Texas high school football teams can play up to 16 games if they make it to the state championships.  Start the college season the last week in August and it is football so people will attend and then have championship weekend end the same as it is now in the first weekend of December.

The playoffs could start the following week with higher seeds hosting the first two rounds, which is obviously a competitive advantage and rewards the higher seed which are better teams, and then the semis and finals could rotate between three bowls each year.  That also would make sure games are full and give fans a chance to see their team without having travel to multiple sites like the NCAA hoops tournament.

One item that is being ignored is that the Presidents have not been presented with any type of a playoff, but instead are fed that it is not possible.  However, if a chart of how much money could be made by hosting games and a television deal could change their mind. Below is what a 16 team playoff would look like.  Ah very, very nice.  This was set up by Yahoo's Dan Wetzel, also go check out his lengthy article on his playoff plan a must read.

Also,  here on the site we will use this bracket and have a fan vote to see who advances if there was an actual college football playoff.  Stayed tuned for that shortly. 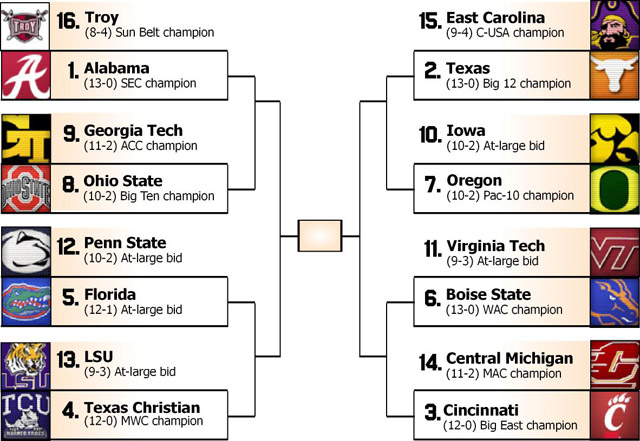