Share All sharing options for: ESPN's GameDay Making Third Appearance to the Mountain West With Visit to TCU 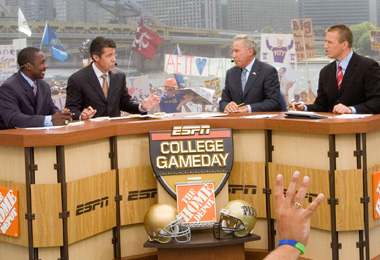 ESPN GameDay is heading once again to a Mountain West school; this time they will be in Fort Worth for when TCU takes on Utah.  The decision was down between Utah/TCU or Iowa/Ohio State but since Iowa lost that game has lost some luster and now the GameDay crew is heading to Fort Worth.

This game has huge implications for both, because a TCU win nearly insures they are going to a BCS game.  Playing games at Wyoming and against New Mexico are nearly formalities.  This also has big implications for Utah, because if they pull of the upset and Boise State loses they will be the highest rated non-BCS team (I am assuming a one loss Utes will stay ahead of a potential 12-1 Houston).

This appearance to a Mountain West schools is the third on the year and ties for the most with the Big XII.  This game is not on ESPN, but rather CBS College Sports so check your tv provider to see if you get this game, if you do not go somewhere and watch the game.