Early Look at Possible Coaches to Take Over UNLV Job

Share All sharing options for: Early Look at Possible Coaches to Take Over UNLV Job

Football Scoop has put together a list of possible coaching candidates at all levels and there has been some word on the UNLV job.

There are some names that Football Scoop mentions:

Our source close to the situation tell us that Athletic Director Jerry Koloskie and President Neal Smatresk are looking for someone with head coaching experience.

That nearly double pay raise should be able to attract a few more coaches then before. That $800K is comparable to the top programs in the Mountain West.

First off, stay away from Andy Ludwig, while he did help lead Utah to a 13-0 record in 2008 his play calling is odd at best. He would run plays just so they would be on film; for example on third and one he would run a reverse or a jet sweep with the wide receiver instead of using their strength with RB Matt Asiata. Also, last off season he left Utah for Kansas State to be an offensive coordinator without ever stepping foot on campus, but then mid summer bolted to take the same position at Cal. There is a reason the guy has twenty years of coordinating experience yet has not landed any heading coaching.

It is hard to see Rocky Long taking over UNLV, just because he is one year removed as the New Mexico head coach. If he is offered the job I could see him declining the offer and build up San Diego State and then get a more high profile job then UNLV. Having said that Long would make a good head coach at least on the defensive end which is what the Rebels have been lacking under Mike Sanford. The down fall besides --in my opinion-- lack of interest is that he has not run a spread offensive attack; while at New Mexico he ran a pro style offense which was successful with seven straight 1,000 yard rushers.

Dirk Koetter is an interesting choice, because his collegiate coaching career was a mixed bag. He was the first coach to get a big job from Boise State after his three successful years at Boise where he won two Big West conference titles and two bowl wins. Just for a perspetive 1998 Boise State was in the Big Sky a FCS league, and he helped them make the jump and they just built upon that to what they are today. He then jetted to Arizona State and while he had a good record overall at 66-44, but was 21-28 against the Pac 10. Big games he was terrible 1-11 against top 10 ten teams and a poor 2-19 against all ranked teams. Koetter was fired from ASU in 2006 and has been the offensive coordinator for the Jacksonville Jaguars for 2007-2009. Koetter's offensive success at Jacksonville has been so-so, but what he did at Boise and Arizona State was having a high flying passing attack which was some what successful.

Butch Jones is out of Central Michigan and has done a great job after taking over for Brian Kelly who took off to Cincinnati. With the soon to be loss of QB Dan LeFevour to graduation Butch Jones may want to jump ship to UNLV which would pay more and if he hangs around long enough the Mountain West may be a BCS league. He was at Central Michigan from 1998-2004 coaching various offensive positions before calling the plays from 2002-2004, and then went to West Virginia for two years before taking over Central Michigan in 2007. His current gig is his only head coaching experience and is looking to go to his third straight bowl apperance and third straight MAC championship. His offense is 18th in the nation in scoring offense and in the top third in total offense. This choice would be under the radar, but his short success could translate to UNLV. Jones has the defense to match and has the Chips only giving up 18 points per game.

Tyrone Willingham no, no, and no UNLV should not take on Willingham. He has notorious stories about butting heads with boosters which is a very important part of being a college football coach. For all the talk about that 1999 Rose Bowl Willingham did at Stanford the team was 8-4 and was crushed by Texas 69-17 and then also San Jose State 44-39. Also, Ty Willingham has had only one season with double digits which was the 2002 Notre Dame and that was with Bob Davie's players. One other coaching fact is that he has a combined record of 76-88-1 with only six of the 14 seasons that ended up with a winning record. I would take Andy Ludwig over Ty Willingham. 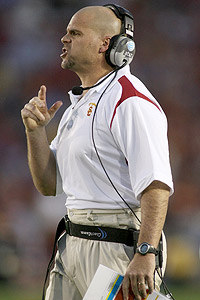 Nick Holt is the baddest and most intimidating coach in college football and can scare kids in going to his school. Holt is a defensive coach which is a change from the prior candidates, however his head coaching experience at Idaho lasted only two years --2004 and 2005 as he went 5-18 overall with the Vandals. Holt resigned as head coach to initially go coach the defensive line for former Idaho alum Scott Linehan with the St. Louis Rams, but then was picked up by USC and Pete Carrol to coach the defense. Currently he is the defensive coordinator for the Washington Huskies. As the USC defensive coordinator from 2006-2008 he was the man behind the defense that ranked 20th, 2nd, and 2nd nationally. He is the only of these candidates to have ties to UNLV as he was a coach there from 1987-1991 as a graduate assistant and a linebackers coach. Holt has the experience with big time programs and success, but lacks the success at any head coaching level. One concern is that if things go south --as in Idaho-- he could jump ship because his teams are not progressing.

Here is how the very early coaching candidates should be ranked:

My wild card pick that has not been mentioned is current University of Houston's head coach Kevin Sumlin who has been the coach for two years at Houston and has made them a known program, plus he was at Oklahoma under Bob Stoops as a co-offensive coordinator. He is a dark horse candidate for this job.