Tulane comes out of the Western division of C-USA, and last year they finished 2-10, and ended the year on an eight game losing streak.

There is not much to like for Tulane, they lost two of their top three receivers, backup running back, and the quarterback situation is no good.

The listed starter on the post spring depth chart is Joe Kemp, but he was not the starter last year; that position went to Kevin Moore who struggled to pass for eight scores and 13 picks.

The top returning starters at each position are below, the biggest bright spot is Andre Anderson who did quite well. Now, if Tulane can stay in games then he will become more valuable to the teams success.

Offensively the Green Wave were inept to be nice, as they came in at 113th in the country in scoring; which translates into a less then solid 16.7 per game.

The rushing attack hopes to be better, but Tulane lost their top two lineman in Troy Kropog and Michael Parenton. Kropog was drafted in the fourth round by the Titans, and Parenton started 47 career games.

For a team looking to improve losing two of the schools all time best on the line is huge, and this will directly effect the rushing game. However Andre Anderson had 864 yards in seven games, really six because of a season ending injury he suffered.

Anderson had four games over 100 and two of those over two hundred yards. With a new line Anderson may have to be creative to get to the level of production from 2008. 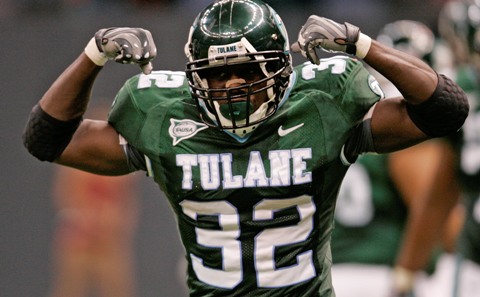 Other injuries that hindered the Green Wave from success was to wide out Jeremy Williams who played in only five games and averaged nearly one hundred yards a game. If the quarterback situation is settled then look for Williams to take advantage of secondaries.

The quarterback situation is between projected starter Joe Kemp and 2008 starter Kevin Moore and in my opinion could change quickly if Kemp starts to struggle. Their first two games are at home against Tulsa and BYU, but both are really good teams that will cause trouble for either quarterback.

Moore lost the job for 2009 because of his second half struggles. In his first five game he averaged nearly 250 per game, and then in the second half the wheels fell off and he only passed over 200 yards in just one game.

On to the equally disappointing defense that also ranked in the 100's all while giving up 34.5 per game. The defense does return six players, but like I say quite often does a team that returns multiple starters really improve if that unit was bad the previous year.

My big signs that teams are bad is turnover margin, that does seem obvious, but this stat goes both ways. Last season they were minus five and again near the bottom of the FBS.

The first two games again will test this defense, because Tulsa and BYU will put up a lot of points and yards; most of those will come from the air attack.

The part of the defense that will be the best is the defensive line, they bring back experience with four players who played significant time while losing just one starter.

Tulane hopes to improve off of their two in season, and have only one gimme in FCS punching bag McNeese State. The rest there are maybe four winnable games @Army, UTEP, @SMU, and @UFC.

However with three of those games on the road those look like less of a chance for Tulane to surpass the two win mark of 2008.