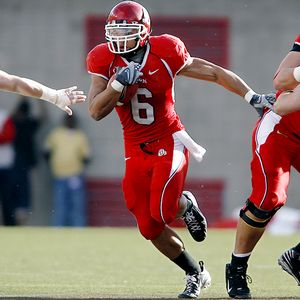 The first business of spring was to tone down the expectations for 2009. The Utes need to replace many playmakers from the 2009 team, most notably quarterback Brian Johnson, corner back Sean Smith, and defensive end Paul Kruger. The latter two were drafted in the second round of the defense.

The main focus on Utah this spring was to find a new starting quarterback, and at the end of spring it is down to two players first is junior-to-be in Corbin Louks, and then junior college star Terrance Cain.

Each has their advantage and disadvantages, and starting with Louks he has been in the system for two years and has playing time the past two years.

The downside to Corbin Louks is that he has not had to throw in his experience, and there are many people who question if he can even throw. That seems quite absurd since he was recruited as a quarterback, but the question should be how good can he throw.

Terrance Cain was a highly recruited out of Blinn College- being just miles from the Texas A&M campus- and was the top rated junior college Quarterback and was an All-American while running a similar style offense that the Utes ran.

Cain's advantage is that he has seen a lot of playing time the past two years. His downside is that he has not been in the Utah system, however he did join the Utes for spring camp to learn the system.

At the end of spring there was no clear winner and the position battle will continue through fall camp. The wide outs took a hit as well and Aiona Key looks to be the top receiver. Last year Key came in late because of a problem of getting his grades cleared from his junior collge.

Key has the size at 6'4' and played a major in special teams this past year by blocking punts and scored a touchdown as well on special teams. Then there is the running game where Matt Asiata will take the lead role and has the chance to get 1,000 yards on the ground.

To supplement Asiata will be a true change of pace in Eddie Wide who is a speed back and is able to make it to the edges. Last year with Darrell Mack and Asiata that duo was a good group, but both were similar type of backs.

Sausan Shakerin is another running back who will be the third back and take over the platinum package that will put him in shotgun and continue the tradition of putting someone different in the quarterback and typically just run the ball from shotgun.

The defense did lose four starters which include the two recent NFL draftees in Sean Smith and Paul Kruger, but the defense should not lose a step. Linebacker Stevenson Sylvester will take over as team captain and the major player on defense.

The Utes also snagged a five star recruit and the number one overall JUCO recruit in James Aiona who will try to take over Paul Kruger's position on the end. The major concern for Utah on defense is their secondary which lost the most talent, and because the Utes play a press defense on the corners so the secondary is the biggest concern.