The march to inclusion is heating up as Utah Attorney General Mark Shurtleff is gathering contracts, statistics, economic data and experts, and expects to be able to file suit against the BCS in June. What Shurtleff is attempting to do is to prove that the BCS is behaving in anti-trust activities, by not allowing all schools a legitimate shot at the national title.

A few years back the BCS caved to political pressure to allow for more access, which in turn lead to five BCS bowl games. This allowed any non-BCS school a bid if they are ranked in the top 12, previously it was top 6. Only the 2004 Utah team made the original requirements, but with the change Boise State, Hawai'i, and Utah made a BCS game.

"From the very first kickoff of the college football season, the BCS uses its monopoly powers to put more than half of the schools at a disadvantage," Shurtleff said. His investigation comes after an undefeated University of Utah team was relegated to the Sugar Bowl in January with no chance to play for a national championship.

For this lawsuit to succeed, it must be able to prove that the BCS has total control of the postseason bowl games, and that it uses its control to benefit some conferences and schools over others. Some law experts feel this lawsuit has some teeth, because there are different restrictions if you are not part of any of the current six automatic qualifier leagues or are Notre Dame.

"There is no doubt that the BCS is a near monopoly," said Andrew Zimbalist, a professor of economics at Smith College who has focused his research on sports monopolies. "There is no doubt that it uses its power to make unequal payoffs to conferences and schools. There is a good case to be made."If the lawsuit is successful, the BCS could face court orders requiring it to mend its ways and pay triple damages to states and universities harmed by the BCS, as well as their legal fees. "

I feel that is on the most extreme end, because it could include the three schools and states that made the BCS - Boise State, Hawai'i, and Utah - or it could just be Utah because of their success in 2008 where they were the only undefeated team in major college football. The litigation is not set until June when Shurtleff will file in Colorado Springs as he gathers more information, and he hopes to have other states to join the party to bring more weight to the table. The key to possibly winning this is by filing in Colorado Springs, and not say Eugune, Austin, Miami, or insert any other big time college town. 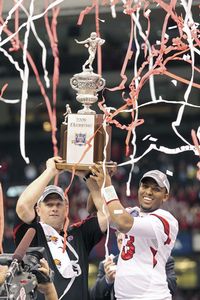 The BCS is not all bad, because it brought us matchups like USC vs. Texas and Ohio State vs. Miami, however it is now to the point that qualified programs are being left out of the BCS in favor of tv ratings and the all mighty dollar. Last year Boise State was ranked 9th one spot ahead of Ohio State, but since the Buckeyes are the bigger draw they were choosen ahead of an undefeated Boise State team.

Even if there is change the schools from the Big 6 will still get the majority of their teams in the tournament with a 16 team playoff that includes all conference champions, and for the BCS honks who feel the regular season would be watered down they are wrong. A team would still need to win their conference which would give only five at-large spots, so the regular season would still be very important. The only slight downside is that teams would schedule down in the non-conference ... oh wait that all ready happens, so scratch that last statement.

One last great quote from the ESPN article:

"I asked the BCS for its contracts and its governing documents," Shurtleff said. "They claim that they are all confidential. They want to do everything the hard way, so I have issued subpoenas and investigative demands for the material."

That does not sound like a smart move, because it looks as if the BCS is trying to hide somehing.

Below is a great interview done on Sports Radio 1280 The Zone in Salt Lake, they had on BCS administrator Bill Hancock.