Now before I get into the game itself I am participating in the Gunaxin's 2008 Blog Bowl Challenge which pits other bloggers against each other for a prize, but the great thing about this contest is that it brings together the best content for all of the bowls from multiple bloggers. So, to check out different perspectives on this bowl game and others then click the picture below and it will take you there. 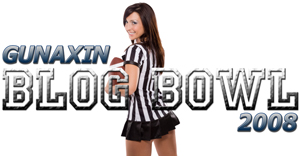 The ever so many bowl games are here and this game features two old WAC rivals, and gives this game some meaning to what league is superior. Fresno State was a team that fell of the map after being in the top 25 and being mentioned as a BCS buster.

Then the Bulldogs do what they do best which is beat a big name opponent at Rutgers and then played then number 10 Wisconsin to a close lose. After that Fresno did their typical thing and lose a few conference games and then get crushed in their biggest conference game against Boise State.

Colorado State was not expected to be this good with first year coach Steve Fairchild and a new quarterback, but the Rams were lead by their running attack of Gattrel Johnson III and Kyle Bell.

Fresno had their bowl game invited wrapped up in early November, but the Rams had to win their last two games to become bowl eligible and also has to defeat their rival Wyoming on the last game of the year.

What to expect in this game is a lot of points and the total to have at least 55. Both teams are pretty identical in total offense per game, with the Rams having a slight edge in the running game and Fresno having the edge in the passing game.

The Rams' ground attack is fueled by first-team All-MWC 225-pound RB Gartrell Johnson, who is a powerful between-the-tackles runner. Behind Johnson, 234-pound Kyle Bell provides excellent depth, and he too is at his best running inside. This doesn't bode well for a Fresno State run defense that's giving up an average of 5.3 yards per carry, so look for the Rams to try to control the time of possession and ride the running game.

Even if the running game gets stalled or the Rams have to pass they have one of the best tight ends in the country in Kory Sperry who catches anything thrown his way. If not for Dennis Pita from BYU, Sperry would be getting some big time recognition.

Rashaun Greer is another receiving threat for the Rams who has 1,045 yards on the year and a couple of scores, but the real strength is the running game of Colorado State.

The running game could be another strength for Fresno, because Colorado State is not great in stopping the run as they gave up 5.2 yards per carry. However the main back for Fresno, Ryan Mathews has been hampered by a knee injury for the better part of the season, and it's unknown whether he'll be able play in the game. The replacement will be Anthony Harding and Jamal Rashad and the way the offensive line for Fresno will allow them to be able to run against the Rams defense.