Share All sharing options for: Face of the Program: San Diego State 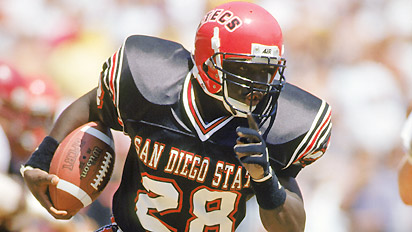 Andy Hayt/Getty Images
The dynamic back wasted no time making his mark for the Aztecs, becoming the first freshman in NCAA history to lead the nation in both rushing (158 ypg) and scoring (15.6 ppg). Faulk ended up ninth in the Heisman Trophy voting, the highest finish for a freshman since Herschel Walker placed third in 1980. He followed by leading the nation in rushing again as a sophomore and was the runner-up for the Heisman. A fourth-place Heisman finish as a junior capped a dominant career for Faulk, a three-time consensus first-team All-American who holds the NCAA scoring record for non-kickers (12.1 ppg). -- Adam Rittenberg
-->In just his second collegiate game, Faulk exploded for 386 rushing yards -- then an NCAA record -- and seven touchdowns against Pacific. He set NCAA freshman records for single-game rushing, single-game scoring and single-game all-purpose yards.

Others who were considered