Face of the Program: TCU

Share All sharing options for: Face of the Program: TCU 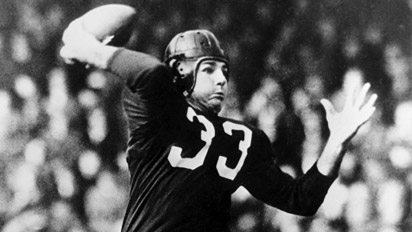 Getty Images
In an era where passing was taboo, Baugh redefined the quarterback position. He came to TCU to play both football and baseball but sizzled for Dutch Meyer on the gridiron, leading the Horned Frogs to the 1935 national championship. Baugh was a consensus All-American the next season, guiding TCU to a victory in the inaugural Cotton Bowl. He led the nation in both passing and punting his final two seasons at TCU. After a stab at professional baseball, Baugh brought his passing skills to the Washington Redskins, winning an NFL championship as a rookie. He was a charter member of both the College and Pro Football Hall of Fames. -- Adam Rittenberg

<!-- Signature moment content starts here-->"When I got in the pros, they had the silliest rules. They favored a running game and a defensive game, and Dutch had taught us just the opposite." -- Sammy Baugh

Others to consider, but is it really close