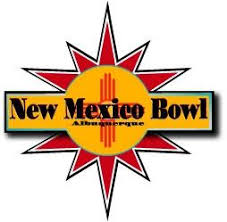 (6-6)
This is a home game here for the Lobos where they make their 3rd straight appearance in the New Mexico Bowl. Nevada got into this game by defeating Louisiana Tech in the last game of the year to become bowl eligible. New Mexico is in trouble after having their top player RB Rodney Ferguson who accounted for over 70% of the Lobo rushing attack. Nevada is led by Freshman QB Colin Kaepernick who went 4-3 as a starter and those 3 loses were by 7 points or less and threw for 291 yards per game and threw 19 TD's and 3 picks.
Nevada has a balanced attack with 225 rushing yards per game and 290 passing per game and should keep the Lobos off balanced, if Nevada stays to form and mixes in their run and pass attack. Nevada's top rusher is Luke Luppincott who averages 115 yards per game and has 15 TD's and then their top recieve also has 1030 yards on the year in Marko Mitchell has 8 TD's on the year as well.
Since Rodney Ferguson is out the running game will be in the hands of Paul Baker who has a whopping 298 yards all season, so that might be a problem for New Mexico in the running game. However New Mexico does have all conference receivers in Travis Brown and Marcus Smith who have combined for 2,000 yards and 8 TD's. So, New Mexico does not have a shortage of offensive talent.
New Mexico is at home and should win this game but without Rodney Ferguson and the fact that QB Donovan Porterie and New Mexico give up the ball way too much and if they do then Nevada will have the chance to win this game. Look for this game to be close just like last years New Mexico when San Jose State and New Mexico played in a close game, but look for New Mexico to pull this out because they have too much offense even without Rodney Ferguson.