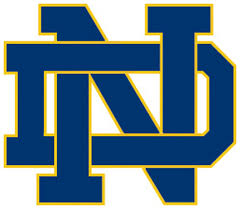 The Irish are coming off a draining 3 overtime game against Navy where they lost for the first time in 43 meetings to them. The Irish have yet to win a home game this year and have been in turmoil all year. For this game Notre Dame is swapping back to Freshman QB Jimmy Clausen who has had some troubles to say the least this year. Air Force is coming off a good win against Army 30-10 where again Chad Hall ran for over 200 yards yet again. The way Notre Dame has played Air Force should be able to run the ball at will and get close to 30 points which is just above their average. Notre Dame's offense is pathetic they only score 13 points per game and only are able to put up 208 total yards per game. The only way Notre Dame has a chance is if they create turnovers which they have not been able to do to well or just come out with emotion since they lost to Navy last week. Air Force and Chad Hall should run all over this Notre Dame defense and put up again around 300 yards rushing against the Fighting Irish, and win going away in the second half.

This is a game of the fallen Rams who seem to have really fallen on hard times after showing minimal offense for the second straight week. On the other hand New Mexico is coming off its worst performance of the year by getting shut out by TCU last week. New Mexico is at home and should be able to rebound after their worst loss of the year. The way the Rams play defense the Lobos should find this game to be refreshing in comparison to the TCU defense. Rodney Ferguson should be able to run at will on this Rams defense to help the Lobos forget last week. As for the Rams offense they have shown to move the ball and if New Mexico has any lapses look for the Rams to convert through their strong running game. Overall New Mexico should win by at least two touchdowns and get back in the win column.

Wyoming's last game might reflect their season when it's all done. While Utah is pretty much on pace for what people thought with their record, but some of the wins and loses have come against unexpected teams. Utah has revenge on the mind with last years debacle at Laramie last year. Wyoming will be one of the better defenses that the Utes will face this year, and that is especially true in the running department where Wyoming is ranked highly nationally. That means that Brian Johnson will need to produce more through the air then he has the last few weeks after coming back from his injury and should be close to 100% if not at full capacity. This game could get interesting if Wyoming is able to slow down Darrell Mack on Saturday. Wyoming has been prone to give up the turnovers and the way the Utes have been playing defensively, so turnovers could be a problem for the Cowboys. Both teams have been going in opposite directions the past few weeks and look for the Utes to secure a bowl birth by defeating Wyoming this Saturday.

The annual pillow fight of the year takes place in the Las Vegas desert Saturday night. Both teams have improved over recent years, but looking statistically both teams are evenly matched. UNLV does have Omar Clayton who has been playing well at QB and should be starting this weekend, and Clayton also provides the running attack that the Rebels need for their spread attack. Last week Kevin O'Connell fueled the comeback against Wyoming after trailing early to secure the win. This game is too close to call but the edge should go to UNLV since they are at home and Omar Clayton has been a spark for them.