Here is the preview of SDSU's week one game, you may ask why do they get their own post, well because its their first game and I am promoting another blog that is about Washington State Football So if you want a real good look of what Washington State will do this weekend I recommend you check out the site. 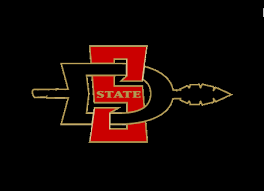 San Diego State finally gets its season underway after having week one off. The Aztecs are coming off a typical season for them in where they underachieved and went 3-9 last year and at the bottom of the conference. The Aztecs do return 10 offensive starters including Senior QB Kevin O'Connell and multiple experienced wide outs that include Brett Swain and Chaz Schilens. Those two receivers put up decent nubmers last year but each year they have played they have increade their output, so these players are going to need to step it up. Attiyyah Henderson the running back for the Aztecs is to have big year at running back and some preseason mags have Henerson as an all conference back, and if he were to come close that level it would help out the Aztec offense that was aneimc last year and scored only 12 points a game. I have no expectations for the Aztecs to win their
opener, Wazzu gave Wisconsin all they could handle early on in that game, but then Wisconsins offense took off. Players for the Aztecs to watch out for are reciever Brandon Gibson who last week had 82 yards and a score and the Cougars running game especially Dwight Tardy who had 97 yards a score but did average 4.7 yards per carry, and then
Alex Brink who did not throw for a ton of yards but threw zero picks and was 17-27 for 172 yards. These numbers could possible increase dramatically since the Aztec defense was nothing special last year giving up 27 points per game. Overall for this game I think San Diego State will be able to keep close early, but until they can prove their improvement I see Washington State winning in convicing fashion.